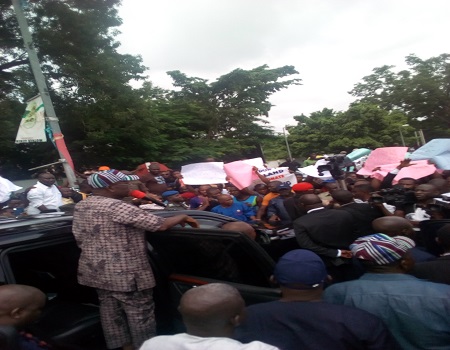 HUNDREDS of youths under the auspices of ‘Coalition of Benue Youths’ yesterday prevented the state governor, Samuel Ortom to attend the APC meeting. The youths had invaded the government house as early as 8.30 am laid siege on the entrance of government house. As soon as the governor’s convoy raced to the gate of government house while on his way to Abuja, the youths had already mounted a wall across the road forcing the convoy to a stop. The youths carried placards with various inscriptions such as; “Ortom don’t go back to APC,” “We don’t have land to donate for ranching,” “APC is Miyetti party,” Our farms are not for cows,” You must leave APC,”Ortom is our party,  and 2019, on Ortom we stand.” Spokesmen of the groups, Terrence Kuanum, and Pastor Dave Ogbole told the governor not to attend the meeting because his attendance may force him to remain in APC which they described as Miyeitti Alla party. They advised him to go back and to seek an alternative platform for his re-election.   The governor, however, pleaded with the youths to allow him to attend the meeting and promised to represent their interest.   But the youths who were not interested in the plea of the governor threatened not to vote for him if he shuns their advise and attend the meeting. To vent their anger one of the spokesmen, Ogbole ordered the removal of APC flag from the Governor’s official car, which the governor’s driver complied. Ogbole had said, ‘if you insist, there is no problem but be ready to crush all of us.”   The governor had to make u-turn and return to the government house before the youths could vacate the area.
Post Views: 821