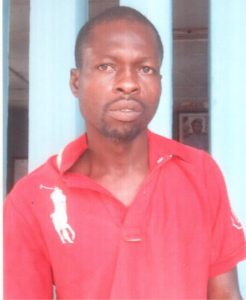 Detectives attached to the Anti-kidnapping Squad, Imo State Police Command have arrested a suspected kidnapper, Nnamdi Ethelbert Ogidi who has a record of kidnapping elderly women.
Ogidi, age 34, confessed to the police that he and gang members who are currently at large have abducted several persons out of which 15 of them are elderly women.
His evil act was brought to a halt after he kidnapped Regina Nkwocha, a 74-year-old woman from Umuanyika, Ngorokpala local government area of Imo state. They were negotiating for N20million ransom when detectives busted their hideout at Umuaguma in Owerri west, Imo state on May23, 2018. Ogidi was arrested while the other members of his gang escaped.
Confirming his arrest , Imo state Commissioner of Police, Dasuki Galadanchi told Saturday Sun that the suspect, Ogidi popularly known as Bori and his gang members have been on the wanted list of the police over several cases of kidnapping.
According to CP Galadanchi, on November 29, 2017, they kidnapped Adulphus Akagha aged 94; on May 7, 2018, they kidnapped 65 year old Dorothy Nkwo and demanded for N5million ransom. She was later released after the family paid N500, 000.
He stated that Ogidi had successfully kidnapped Mrs. Nkwocha and was negotiating for a N20million ransom when detectives led by Supol Sani Ahmed stormed their hideout and rescued the victim.
At the police station, Ogidi confessed that he joined a gang of kidnappers five years ago. “I am from Imo state and after dropping out of senior secondary school, I learnt how to become a mechanic.
Along the line I met bad friends who initiated me into the deadly cult group known as Debam fraternity. Most of them were into one bad thing or the other, so it was easy for me to join a gang of kidnappers who are also members of the cult.
“We derive pleasure in kidnapping elderly women and while their family members will be running around for ransom, we will take turns to rape the women.
Our hideout is at Egbema local government. We prefer elderly women because it is easier to control them and their family members are always in a hurry to pay for their release” he said.
Ogidi begged all the elderly women that they have kidnapped to forgive him. “I know that we have made a lot of money from kidnapping but because of the trauma that those women who are old enough to be my mother went through, I am sincerely sorry. I still hope that the police will arrest the others because I cannot face the consequence of our action alone.”
Post Views: 766