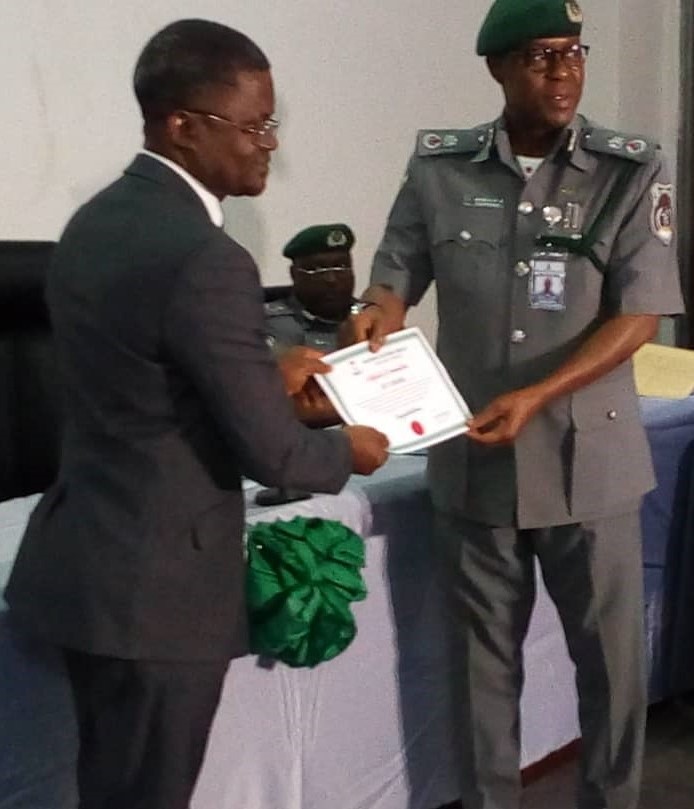 Contrary to assumptions, and in a development that accounts for the steady interception of cleared but suspect containers on the highways, contraband cargoes do not freely escape checks at the Apapa Area Command of the Nigeria Customs Service (NCS) due to compromise by officers, they are actually deliberately released to trap those behind the imports.

This revelation was made by Compt. Bashir Abubakar, who lamented that many containers have been abandoned inside the ports by the importers after being detected to contain contrabands, thereby making it difficult or even impossible for the agency to arrest and prosecute the owners.

He explained that though a few cargoes with minor trade infractions do escape, others, like the 40ft container of tramadol last year, were being deliberately released in collaboration with the two other enforcement layers – the Controller-General’s Task Force and the Federal Operations Unit (FOU), to enable the service track, arrest and prosecute those behind the imports.

However, Abubakar, who addressed newsmen in Lagos Thursday on the command’s performance in 2018, disclosed that the Federal Government has approved the purchase of scanners for the ports to improve cargo examination efficiency, accuracy and speed.

Reviewing the past year, he disclosed that the command generated the sum of N404. billion in 2018, noting that the sum, though less than the command’s 2018 target of N426.1 billion by N22.1 billion and represents 95 per cent of the figure, exceeded the 2017 generated revenue of N350.9 billion by N53 billion.

Also on a positive note, the command said it recorded 1.266 million metric tonnes of exported good valued at approximately $239.47 (to N73.16 billion) last year and achieved high level of export declaration compliance, while 2,500 containers were blocked over non-compliance.

He attributed the revenue increase partly to the implementation of the Nigeria Integrated Customs Information System II (NICIS II), which had blocked revenue leakages in cargo clearance procedures at the command.

The other strategies that helped the command’s success in import/export trade transactions included the novel 24-hour dispute resolution team, on-the-spot examination with all relevant agencies, advanced system and monitoring, and collaboration between customs’ internal/external units and other government agencies.

According to Abubakar, in 2018, “72 containers of various general goods such as used spare parts, used tyres and other sundry goods valued at N9.626 billion were intercepted. The command also seized and condemned 41x40ft containers of controlled pharmaceutical products, including tramadol in excess of the allowable milligrams, with Duty Paid Value (DPV) of N8.812 billion.”

It equally intercepted and seized an export-bound used helicopter valued at N210.6 million, and another completely knocked down (CKD) in-bound aircraft, Cessna 182A, valued at N486.9 million.

All these were in accordance with extant laws and guidelines following trade infractions such as false declaration, concealment or complete disregard of import/export guidelines, Abubakar said.

According to him, these achievements earned him and the command the World Customs Organisation (WCO) Merit Award for exceptional service in the international customs community, which was presented during the WCO Day celebration in Abuja last month.

On its part, the NCS also awarded some officers of the command the Certificate of Commendation in recognition of their transparency and dedication to duties. They included the Team Manager, Customs Intelligence Unit (CIU), Apapa, Assist. Comptroller Bello A. Ahmed.The others were Officer-in-Charge, Free Trade Zone, Assist. Comptroller Faith M. Ojeifo, Staff Officer at SIFAX, Chief Superintendent of Customs, Usman Iliyasu, Superintendent of Customs, Peter Odangla of CIU Apapa, and Officer-in-Charge, Customs Processing Unit, Apapa, Zarma B. Adamu.