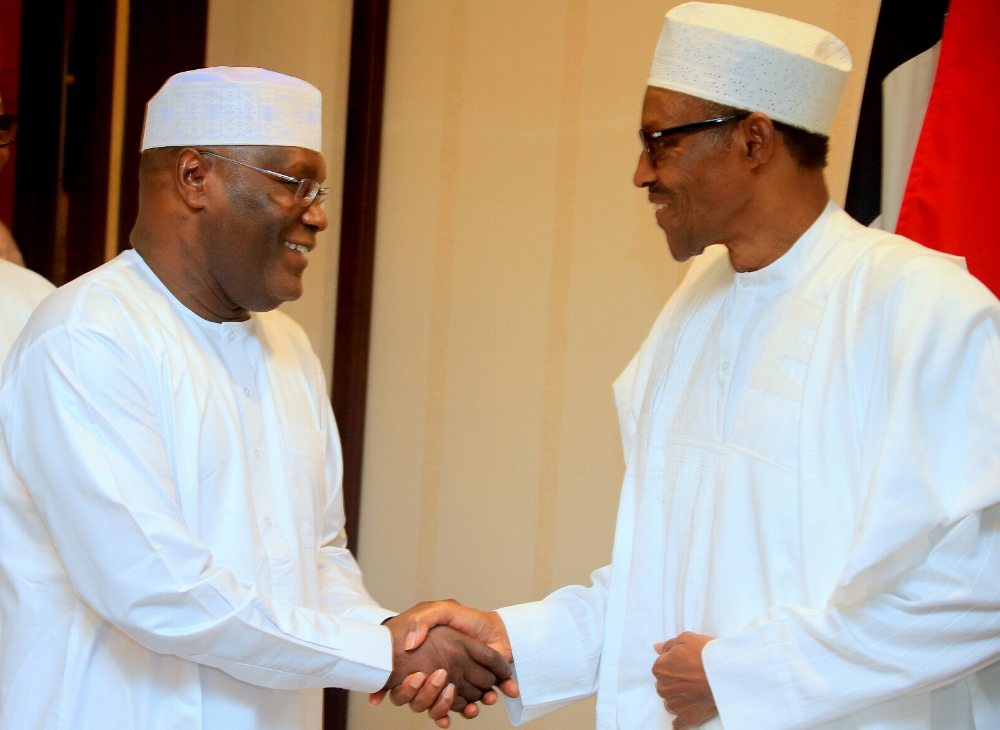 *President Muhammadu Buhari (right) in a warm handshake with former Vice President Atiku Abubakar during a courtesy visit to the President at the State House, Abuja *PDP ready to receive him After months of speculation, during which his acolytes had gone ahead of him to the opposition Peoples Democratic Party (PDP), former Vice President and major stalwart of the ruling All Progressives Congress (APC), Atiku Abubakar, has also dumped the party to seek justice and fairness elsewhere. Atiku regretted that “while other parties have purged themselves of the arbitrariness and unconstitutionality that led to fractionalisation, the APC has adopted those same practices and even gone beyond them to institute a regime of a draconian clampdown on all forms of democracy within the party and the government it produced.” Welcoming the news with an open hand, the PDP has sharply congratulated Atiku for resigning from the APC. Speaking through its National Publicity Secretary, Dayo Adeyeye, the party said it was ready to welcome Atiku back, adding that the PDP had in times past encouraged politicians who defected to APC to return due to the spate of political turmoil in the ruling party. According to his resignation letter as released by his media office in Abuja, the former Vice President said that he had left the then ruling PDP in February 2014 to join the APC because of the “fractionalisation” and “factionalisation” of his former party, which meant that he accepted the APC’s courting since 2013. The letter, as released by his media office in Abuja, noted that on December 19, 2013, a delegation of the APC “had come to appeal to me to join their party after my party, the Peoples Democratic Party, had become factionalised as a result of the special convention of August 31, 2013. “The fractionalisation of the PDP on August 31, 2013 had left me in a situation where I was, with several other loyal party members, in limbo, not knowing which of the parallel executives of the party was the legitimate leadership. “It was under this cloud that members of the APC made the appeal to me to join their party, with the promise that the injustices and failure to abide by its own constitution which had dogged the then PDP, would not be replicated in the APC, and with the assurance that the vision the other founding fathers and I had for the PDP could be actualised through the All Progressives Congress. “It was on the basis of this invitation and the assurances made to me that I, being party-less at that time due to the fractionalisation of my party, accepted on February 2, 2014, the hand of fellowship given to me by the All Progressives Congress. “On that day, I said ‘it is the struggle for democracy and constitutionalism and service to my country and my people that are driving my choice and my decision’ to accept the invitation to join the All Progressives Congress. “I said that because I believed that we had finally seen the beginning of the rebirth of the new Nigeria of our dreams which would work for all of us, old and young. However, events of the intervening years have shown that, like any other human and like many other Nigerians, I was fallible.” The letter continued: Only last year, a governor produced by the party wrote a secret memorandum to the president, which ended up being leaked. In that memo, he admitted that the All Progressives Congress had ‘not only failed to manage expectations of a populace that expected overnight ‘change’ but has failed to deliver even mundane matters of governance.’ Of the party itself, that same governor said: ‘Mr. President, Sir, your relationship with the national leadership of the party, both the formal (NWC) and informal (Asiwaju Bola Tinubu, Atiku Abubakar, Rabiu Musa Kwankwaso) and former governors of ANPP, PDP (that joined us) and ACN, is perceived by most observers to be at best frosty. “Many of them are aggrieved due to what they consider total absence of consultations with them on your part and those you have assigned such duties. Since that memorandum was written, up till today, nothing has been done to reverse the treatment meted out to those of us invited to join the All Progressives Congress on the strength of a promise that has proven to be false. If anything, those behaviours have actually worsened. More importantly, the party we put in place has failed and continues to fail our people, especially our young people. How can we have a federal cabinet without even a single youth? A party that does not take the youth into account is a dying party. The future belongs to young people. I admit that I and others who accepted the invitation to join the APC were eager to make positive changes for our country that we fell for a mirage. Can you blame us for wanting to put a speedy end to the sufferings of the masses of our people? Be that as it may, after due consultation with my God, my family, my supporters and the Nigerian people whom I meet in all walks of life, I, Atiku Abubakar, Waziri Adamawa, hereby tender my resignation from the All Progressives Congress while I take time to ponder my future.
Post Views: 983