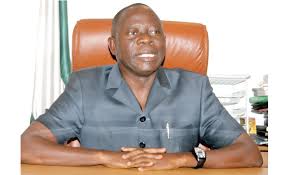 National Chairman of the All Progressives Congress (APC), Comrade Adams Oshiomhole, has warned that the ruling party would do everything possible to crush the rebellion from the factions of the party under the auspices of Reformed APC. Speaking when he received some members of the defunct Congress for Democratic Change (CPC) at the party secretariat, in Abuja, Oshiomhole described members of the R-APC as desperadoes that are no longer feeding fact from government. “We listerned to Buba Galadima. It is as if a very hungry bird is dancing at the centre of the road and a disgruntle drumer not far away in the bush is druming for him. This is not to say that we are not aware that there are challenges here and there but anything about APC is consider more much more than the sum total of all the challenges we have in many of the states and by the special grace of God we shall overcome them and we are already overcoming them. “I am very confident that we can afford to ignore Buba Galadima. And like I said before, I am ready to go to any length to talk to people who mean well and who have genuine grievances arising from communication gaps or misunderstanding or even from the error of judgement on the part of anyone or even from the way we have managed our patronage. “Protests like these are acknowledge and we are working to resolve them. When we see people who have genius grievances we are not ashame to talk to them. We recognise that democracy is an equaliser and only people who humble enough to engage can survive and we have been engaging. “We have been meeting with various individuals and groups who we believe really have genuine concerns on certain matters and we are making progress but when we see people who don’t mean well, there are a lot of idle people who don’t have any other thing to do and once they don’t have access to national honey pot, then they begin to complain. “For me, there is no cause for alarm, nobody should panic over one Baba Galadima, whose group, I believe cannot define us in the next election in 2019. Nigerians are wisers they know that corruption is fighting back, they also know that President Buhari’s resolve to figth corruption must elicit a counter force and that force must find attraction in some people but like we have rightly said we should not be distracted and we encourage the president not to be distracted, he must remain focus and sustain the fight and I believe the rebellion will be crushed using the superior power of argument, persuading our people not to forget in a hurry where we are coming from,” he said.
Post Views: 801