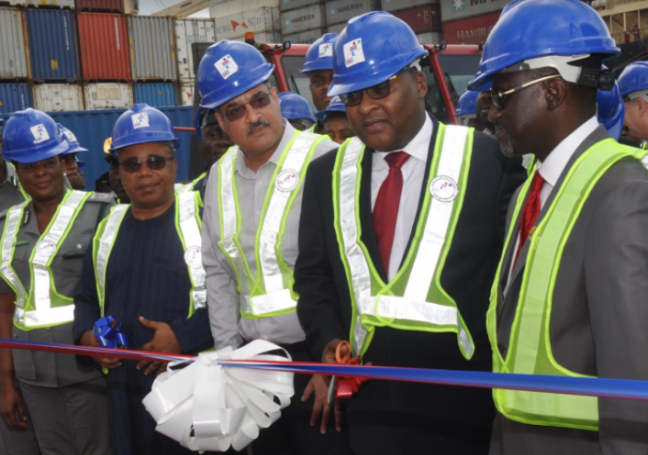 In view of its continued investment, which has ensured positive record of cargo handling and job creation, the West Africa Container Terminal (WACT) will be performance benchmark for the other seaport terminals in the country, the Federal Government has said.

This came as WACT, to improve efficiency in cargo discharge following a surge in vessel traffic at the eastern port due to the gridlock on the western port roads and the recent 10 per cent tariff rebate by the Nigerian Ports Authority (NPA), launched two new Mobile Harbour Cranes (MHCs) worth $10 million (N3.6 billion) at the Onne Port, Rivers State.

These followed a recent addition of 10 new specialised terminal trucks and two new reach stackers, aimed at increasing vessel turnaround time at the terminal and giving it a record of unmatched equipment and operational efficiency.

Speaking at the launch of equipment, the Executive Secretary, Nigeria Shippers’ Council (NSC), Hassan Bello, said the main reasons of concessioning the ports “would be realised by this terminal and we will use this terminal to benchmark the performance of others,” according to online maritime platform, Ships&Ports.

According to Bello, “the more efficiency we have, the more cargoes we will get because Nigeria is a natural harbour due to the market that is available, and I am happy today that this terminal is becoming one of the most efficient we have in West Africa, and this is gladdening our hearts.”

He reiterated the Federal Government’s commitment to encouraging more importers to patronise the Onne Port, stating: “Our terminals need to grow and show efficiency. I am happy with the competition because this is how to compete. We need options, choice for shippers to discharge their cargoes.

“The commissioning of these Mobiles Harbour Cranes is no doubt significant because it will improve efficiency. We are happy with the 30 per cent increase in volume of cargoes and in the long run, more Nigerians would be employed and it will make the terminal operation contribute to the economy.

“The more efficiency we have, the more cargoes we will get because Nigeria is a natural harbour due to the market that is available, and I am happy today that this terminal is becoming one of the most efficient we have in West Africa, and this is gladdening our hearts.”

WACT Managing Director, Aamir Mirza, had described the $10 million investment as a key enabler for customer satisfaction, stating that through the massive investment at the terminal, the company has recorded tremendous growth of 17 per cent in 2017, 21 per cent in 2018 and 20 per cent so far this year, and has attracted 700 direct and 2,000 indirect employments in the country.

“Our vision is to make WACT the best performing container terminal in West Africa. We believe this vision can be realised early enough if the government can support us to reduce the challenges of security by ensuring the safety of vessels on our waters, and improve road connectivity, among others.”