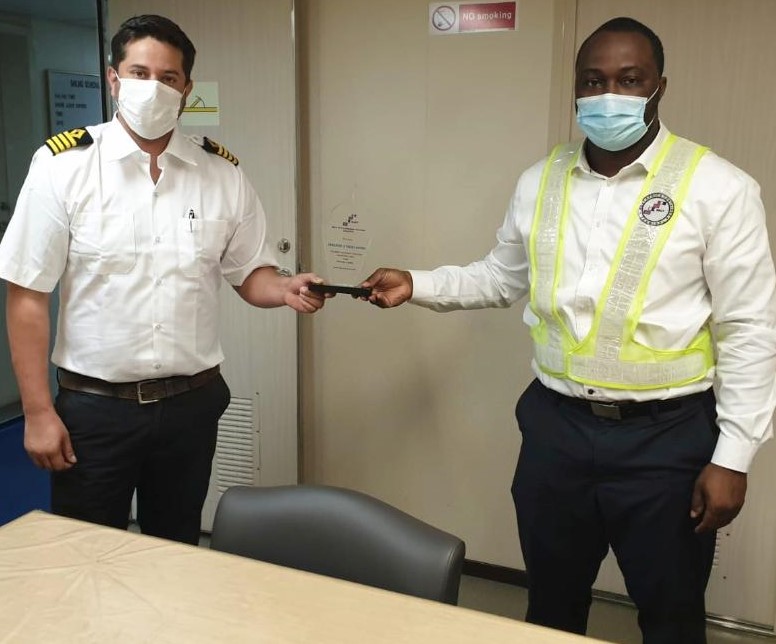 Leading container terminal operator, West Africa Container Terminal (WACT), made history Saturday when it received at the Onne Port, Rivers State, the largest containership ever to berth at any Nigerian port.

The huge ship, Maersk Stadelhorn, with 300 metres overall length and 48.2 metres beam, has capacity for about 10,000 TEUs (Twenty Equivalent Units) of containers. Before now, the regular containerships calling at Nigerian ports are in the class of WAFMAX, which has maximum capacity of 4,500 TEUs.

Maersk Stadelhorn successfully berthed at WACT, Onne at 4pm and is currently at Berth 8 and overlapping on Berth 9 due to its very large size. In a statement on the history-making berth, Country Manager of APM Terminals Nigeria, Klaus Laursen, expressed excitement at the achievement.

“We thank the Nigerian Ports Authority for dredging the channels and for professionally piloting the vessel to the port,” he said. “Without the effort, support and approval of NPA, this would not have been possible.”

In addition to NPA’s support, he noted the APM Terminals’s huge investment at WACT on terminal upgrade with modern cargo handling equipment as having enabled it to handle very large container carriers and improved its services.

“The feat recorded here at WACT is impressive. The significance of this development is that even the ports in Lagos will now have to try and catch up with the new standards set by WACT.

“It is also important to mention that this is happening at this critical time when economies of the world are facing a lot of challenges due to the Covid-19 pandemic. This is a mark of confidence in the Nigerian economy.

“We are saying that in spite of Covid-19, the Nigerian economy is strong and will continue to be buoyant. The Covid-19 challenges are temporary, and the economy will certainly record positive growth in the nearest future.”

Similarly, the Managing Director WACT, Aamir Mirza, disclosed that over the past four years, the company has continued to develop its business by investing in people and container handling equipment, “and our handling this vessel is in line with our vision to make WACT the best performing container terminal in West Africa.”

According to him, by successfully handling the 10,000 TEU vessel, the terminal operator has “once again proved to all our customers that WACT is capable of competing with other ports in Nigeria and West Africa.”

On his part, the WACT Commercial Manager, Noah Sheriff, said the terminal has become the gateway to Eastern Nigeria and a strong alternative to Lagos ports over the years with its multi-million-dollar investment in information technology and modern cargo handling equipment.

According to him, “the rapid growth you see at WACT today is partly because of our e-commerce capabilities that allow landside customers to do business with WACT from literally anywhere across Nigeria, coupled with our continuous investment approach, which has resulted in such upgrade from our liner customers.

“We are excited about the significant milestone recorded today in WACT, Onne. This is a positive development for Onne Port and the entire business community because large vessels come with many benefits for authorities, liner customers and landside customers.

“Recall that in December 2019, we handled a containership measuring 265 metres in length overall, which at the time was the first gearless vessel and the largest containership to visit a seaport outside the Lagos area. It took us only 2.75 days to turnaround the vessel.

“Also in January this year, we handled another large gearless containership with a capacity of 3,081 TEU, deployed by Pacific International Lines (PIL). So, we have continued to enhance our capacity and capabilities, and you can see another example today with the berthing of Maersk Stadelhorn.

“Before now, it would be difficult to imagine that such a humongous ship could berth in Nigeria, but here we are with the ship at our berth. We must thank the Nigerian Ports Authority for the dredging of the channel to make it possible for this ship to come in. The NPA Managing Director has indeed been very supportive.”