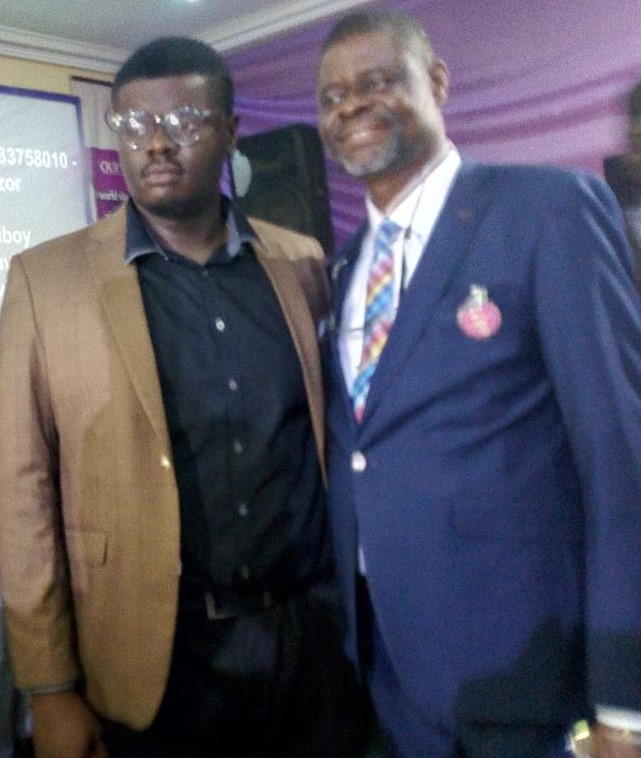 In a blaze of passion and talent, Baze University graduate of Economics, Uvie Ogheneyoma Otive-lgbuzor, has formerly launched into the entertainment scene with a 15-track gospel and motivational music album, Frontliners.

It was a smashing event yesterday as Otive-lgbuzor, whose stage name is Uviboy, presented the album, which has tracks in rap and hip pop genres, before an Abuja audience that included his public analyst and motivational speaker father, Dr. Otive-Igbuzor.

Explaining his preference for stage communication, Uviboy said it was motivated by the “need to deploy many ways to deal with the challenges of the present generation, and music is one of them.”

Therefore, he scripted his tracks, including Blessing, Holy Ghost, Corruption, My Mother Land, Thank God, No Shaking, Ready, Speak to Me and Time Zone, in a language sufficiently clear to relay his message and relate with his target audience without miscarriage of intention.

While Corruption speaks directly to the political class on the need to help the masses by shunning corrupt tendencies, the track, Ready, is a clarion call on the people to be conscious of their life style.

He disclosed that Ready was among his most challenging to write, because it has a lot of content: “I was talking about rapture in the song and how people are expected to live their lives. It actually took me three years to get it right. At a time, I felt the devil probably didn’t want me to release the song.”

Mindful that the younger generations are no longer swayed by the conventional gospel song format, Uviboy has packaged most of his tracks in rap and hip pop styles, the creative ingenuity that has already earned him the title of a ‘Rap Priest’.

Though the artist has targeted his contemporaries, the songs however are appealing to audiences across ages because of their danceable lyrics and inspiring music text.

Uviboy’s entrance into the music world was not sudden. He started way back in his secondary school days: “When I was very young, my sister and I always composed songs and sang at home, and when I was in SS2, I discovered that I actually knew how to rap.

“I am targeting the youths who are no longer interested in gospel and motivational music. They only want to hear their brand of secular music. So, I packaged my songs in a format they are used to.

“I know that I am going to change the gospel industry and I am not just talking about Nigeria but beyond Africa.”

The artist, however, disclosed that convincing his parents was very tasking. His statement was later confirmed by his father, who explained how he had retorted categorically that his son cannot be a musician.

He said: “I had a clear idea of the type of profession that I wanted my children to practice. I always told people that I preferred a professional in middle class to super rich footballers and musicians.

“My children knew my view and expectation. So, when my son took interest in music, he held it from me and his mother. I had the shock of my life when I went to his school, Baze University, where he was reading Economics, to check on him.

“I saw his car but did not see him and he was not picking his calls. I just tried my luck to ask a student whether he knew one Otive-lgbuzor and he replied that he just had a show. I was later to discover that he has been performing in school.

“When he finally summoned the courage to tell me that he was taking to music, I told him point blank that my son cannot be a musician. I warned him not to add my name to his name if he chose to be a musician.

“But as I was reacting, I was praying and reflecting. God used the opportunity to teach me a lot of lessons in life. First is that you cannot live the life for your son. As a father, you only need to help your son discover himself and support him to succeed.

“The second lesson is that all professions and careers are required for the benefit of society. We need good politicians, lawyers, architects, accountants, pharmacists and doctors, but we also need musicians, footballers and fashion designers.

“When I finally decided to support my son in his chosen career and began to listen to the lyrics of the songs, I cannot thank God enough for making me change my mind.”