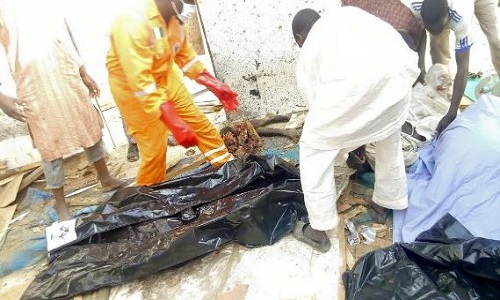 The Borno State Police Command has said that two female Boko Haram bombers died on Wednesday night while attempting to infiltrate 333 Artillery military hangout in Maiduguri The Police Public Relations Officer (PPRO), Edet Okon, disclosed this in a statement released Thursday in Maiduguri. Okon said that the first bomber was gunned down by soldiers while trying to buy a ticket to gain entry into Mammy market, where soldiers socialise. The soldiers had shot her on suspicion she was a bomber. “The bomb exploded and killed the first bomber while the second bomber detonated her IED inside the tricycle. The driver of the tricycle fled the scene. “As a result of the explosions, the two bombers died instantly while fifteen persons were injured and were rushed to the hospital for treatment. “Meanwhile, the scene of incident has been sanitised by a team of EOD personnel and normalcy has been restored. “The Commissioner of Police Borno State, CP Damian Chukwu, assures members of the public of the commitment of the force to continue to protect lives and properties at all times. He also urged residents to be extra vigilant and to promptly report suspicious persons and activities to the police or other security agencies for necessary actions.(NAN)
Post Views: 706