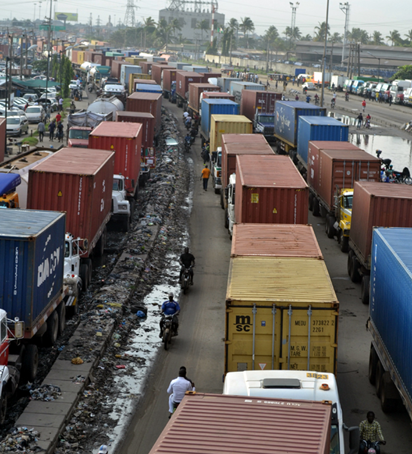 Haulage operators under the aegis of Containerised Truck Owners have petitioned both the federal and Lagos State governments over their daily trauma in long and sluggish truck queues to the seaports, which they said affects their health, lives and their vehicles.

Rising from its strategy sessions in Lagos since its recent emergence, the group, which comprises the Association of Maritime Truck Owners (AMATO) and the Container Truck Owners Association of Nigeria (COTOAN), appealed to both governments to urgently address their plight.

A communique signed by AMATO President, Remi Ogungbemi, and COTOAN’s Wasiu Oloruntoyin noted that the situation has caused untimely deaths of truck drivers while on the queue; health risks to the drivers in those truck queues due to their inability to bathe, eat, sleep and rest adequately;

The drivers’ exposure to incessant harassment by street urchins, commonly known as area boys; truckers on the queue being subjected to wanton extortion by countless security agencies at rates ranging between N80,000 and N120,000 per truck, depending on the operator’s negotiating power;

Exposure of the trucks to vandals, who constantly damage them and steal various critical parts, which replacements further drain the operators’ lean purses; and subjection of the drivers to serial brutalisation and dehumanisation by sadistic security operatives.”

They further noted that apart from the seasonal spike in imports, “Nigeria also contends with increased security challenges from marauding criminal elements, as well as high incidents of extortion by rampaging unscrupulous security operatives along the ports access roads.”

“Ideally, the Christmas season spells good tidings and joy, but in the current poor conditions of the Lagos ports access roads, the Yuletide only spell ‘sorrow, tears and blood’ for us, except the concerned governments hearken to our cries and save our lives and means of livelihood,” the truckers said.

Therefore, they appealed to the general public, especially those residing around the corridors of the truck queues, to prevail on the concerned authorities for automated system to regulate movement in and out of the ports.

According to them, this will decongest the roads by ensuring that trucks only head for the ports on appointment. They appealed for a truck terminal at their expense, to serve only trucks the already booked to load in the ports.

They further urged the shipping companies to provide adequate and functional holding bays for their empty containers, noting that no matter the capacity of the facilities, they would always be under-utilised as conveyance of the boxes still rests on the traffic situation.

Meanwhile, the group appealed to the Lagos State Government to recall to site the contractor handling the expansion of the ABAT Trailer Park at Orile Iganmu, adding that if completed, the park would reduce the volume of trucks heading simultaneously to the ports for business.

While commending the present multi-agency taskforce managing traffic on the ports access roads, the group insisted that such efforts “are not the ultimate but only a part of the solution to insanity on the roads.”