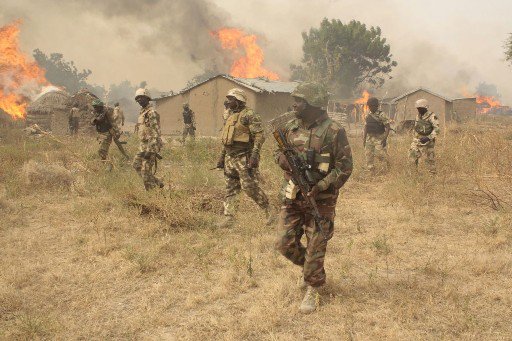 The Army yesterday said troops killed 15 Boko Haram terrorists in an encounter at Arege, Borno State. A statement by the spokesman, Brig.-Gen. Texas Chukwu, said: “Troops of 7 Brigade, Sector 3 of Multinational Joint Task Force encountered Boko Haram terrorists at Arege, Borno State. “Fifteen terrorists were neutralised while some fled into the bush with injuries. Efforts are on to arrest the fleeing suspects. “Items recovered include one anti-aircraft gun; five AK-47 rifles; one light machine gun. “Unfortunately, one soldier was injured and is receiving attention at the military medical facility.” Troops also rescued a girl abandoned by Boko Haram terrorists who fled on sighting them, Gen. Chukwu added. According to him, the troops were on clearance operation. He added that three AK-47 riffle magazines, one FN rifle magazine; one suicide vest; one dry cell battery; one 36 hand grenade; two nine volt batteries; one pressure plate; wire for making Improvised Explosive Devices (IED) and two grinding machines were recovered from them. The Army also arrested 10 people in Biliri and Shongom Local Government Areas of Gombe State after averting a clash over land. A statement yesterday by Gen. Chukwu said troops immediately mobilised to the troubled spots after receiving information on the crisis. According to him, those arrested were “believed to be the masterminds of trouble” that would have snowballed into a clash. He added that items recovered from them were one AK-47 rifle loaded with 28 rounds of 7.62 mm (special) ammunition and one G3 rifle, loaded with 21 rounds of 7.62 mm (Special) ammunition; a double barrel gun; 10 locally-fabricated guns; 39 cartridges; three knives; four knock out bangers and one round of 9mm ammunition. Bottles of gun powder and assorted charms were also recovered from the suspects.
Post Views: 821