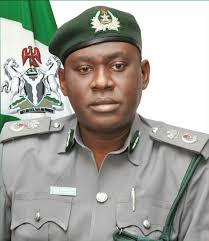 Ahead of its official revenue generation quota from the Headquarters of the Nigeria Customs Service (NCS), the Tin Can Island Command (TCIC) is already working towards achieving N540 billion this year, at a monthly minimum of N47.4 billion.

The command, buoyed by its successive high performance records over the years, even as it exceeded its 2019 official target of N342 billion by N4 billion, is expectant that its official task would not be far apart from the self-assigned target given the agency’s total expected revenue of N2 trillion for 2020.

According to Ejesieme, the command was only able to surpass its 2019 revenue target by N4 billion because of stakeholders’ support. He noted: “We had a target of N342 billion in 2019 and were able to make N346 billion, with an excess of N4 billion.”

“Using the same projection, we are envisaging that the command, out of the N2 trillion target government has given us, will get N540 billion for year 2020. This translates to N47.4 billion every month. It is actually not going to be very easy but for the strategies that the comptroller has put in place. This is the essence of the conversations, consultations and all the meetings.

“He met with officers in the middle cadre, OC terminals, members and leadership of the various associations, key security agents and so on. In all of these meetings, he highlighted some of the achievements we made last year, thanking them for their support and collaboration and also preparing their minds for the challenges ahead.

“We believe that customs alone cannot achieve this; that is why the comptroller is seeking the support of all and sundry so that the command’s anticipated target is achieved; and with the comparative advantage from the border closure, we are hopeful.

“What we have agreed at these meetings was to tighten the loose ends in the value chain. We are still expecting our figure from the headquarters, but before then, the comptroller, as a proactive officer, has actually N540 billion for the command, and we are striving to make sure we meet up.”

Meanwhile, Ejesieme explained that in the light of the Federal Government’s focus on discouraging import to enable it grow the local economy, customs revenue from export is also expected to improve. However, he stressed that customs is not just about meeting revenue target but essentially ensuring trade facilitation.

“Unfortunately, Nigerians are not taking complete advantage of the Federal Government’s windows for export,” he said. “If we do more of export than import, it would also give us an edge, because we would now talk about balance of trade.

“Right now, the volume of import is still higher than export. The government is trying to sensitise people to take advantage of the free facilities and incentives in export.”