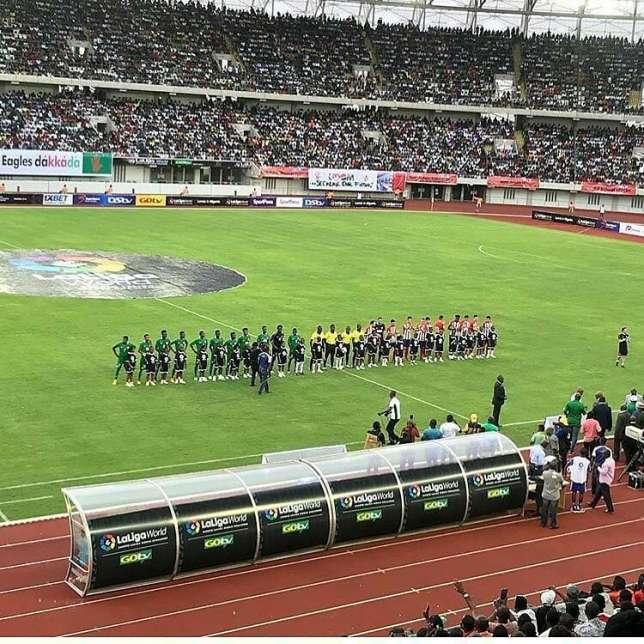 Despite producing moments of brilliance and dictating the tempo of the GOtv Max Cup for a larger period, the Super Eagles B team  succumbed to a late winner.
Atletico Madrid defeated Nigeria 3-2 in an entertaining friendly encounter played at the Godswill Akpabio International Stadium on Tuesday evening. Goals from Angel Correa, Fernando Torres and Borja Garces denied the Super Eagles B team a victory, despite scoring two top quality goals through Kelechi Nwakali and second-half substitute Usman Mohammed – whose effort evoked memories of country legend Austin Jay Jay Okocha. Club legend Torres started from the bench with Kevin Gameiro and match MVP Correa leading the line for Atletico while Salisu Yusuf had Lobi Stars’ Kadiri Samad supported by Emem Eduok – from the right flank – in his attack. The first chance of the encounter fell to Nigeria after captain Musa Muhammed released Kadiri who raced clear of the defence but could only shoot straight at Jan Oblak. In the eighth minute and against the run of play, Atletico had their first sight of goal but Kevin Gameiro’s firm shot met the side-netting. Yusuf’s men dictated the tempo of the game but were unlucky not to go in front with Eduok’s curler and Ajanah’s miscued header – off the former’s free-kick – missing the target. However, in the 32nd minute, Nwakali produced a moment to relish for a long period as the youngster beat an Atletico player before unleashing a long-range curler past Oblak to hand his side a deserved lead. The Super Eagles B team lead would, however, be short lived after Emem Eduok conceded possession – in his half – to Thomas Partey who fed Correa. The Argentina forward toe-poked past an onrushing Olufemi Thomas. Before the interval, Destiny Ashadi – on as an early substitute for Austria Wien’s Alhassan Ibrahim – fluffed Nigeria’s chance to go into the break with a lead after his side-footed effort from an Eduok cutback missed the target. Torres came on before the restart much to the delight of the fans, and the former Liverpool marksman made his presence felt almost immediately, but Thomas was equal to his long-range effort. The Enugu Rangers shot-stopper, again, produced a smart save from Gameiro’s effort before Torres struck the rebound wide, with the post unguarded. But three minutes after the hour mark, Thomas was powerless to stop Torres at his third time of asking, as the Spain international, unmarked, connected a header to a perfectly-weighted corner kick from Correa to give the visitors the lead for the first time in the tie. Nigeria drew level with Mohammed scoring a goal Jay Jay Okocha would be proud of. The former Taraba United midfielder fed off fellow substitute Tosin Omoyele’s pass, skillfully – and severally turned an Atletico defender in and out, before converting to draw Nigeria level. But Garces ensured Simeone’s men ended the winner of the maiden GOtv Max Cup after he sliced an effort past Thomas with only five minutes to go.
Post Views: 1,072