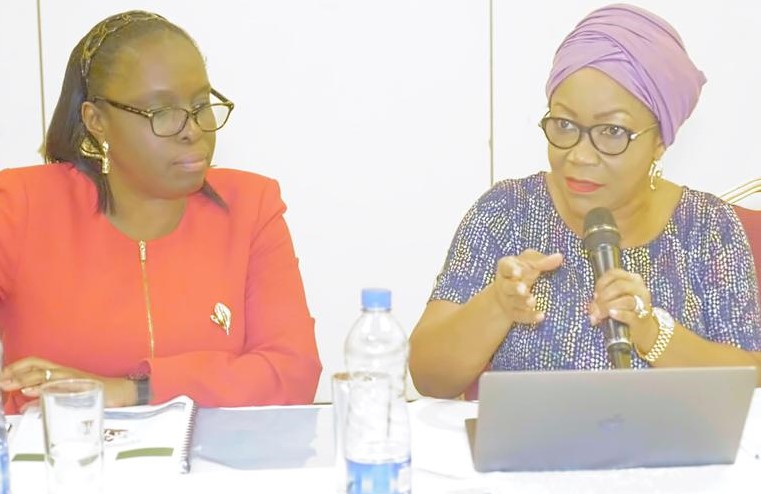 Secretary General of The Abuja MoU, Ufom Usoro (right), and representative of the NIMASA Director-General, Ronke Thomas, at the review of the National Maritime Transport Policy in Lagos

To avoid clashes in content or misplacement of priorities, given that the more encompassing National Transport Policy (NTP) is now at the final level of approval at the Federal Executive Council (FEC), stakeholders have called for the Draft National Maritime Transport Policy (NMTP) to be aligned with the NTP.

Speaking at a forum organised by the Nigerian Maritime Administration and Safety Agency (NIMASA) to review its NMTP ahead its implementation, to ensure it could adequately drive sectoral growth and also stand the test of time, the Secretary General of Abuja MoU, Mrs. Ufom Usoro, stressed the need to refer to NTP during such review.

The former head of NIMASA, who was also a member of the NTP drafting committee, further advised that the NMTP should focus more on the objectives of the maritime sector rather than the regulatory agencies.

Similarly, another former head of NIMASA, Mr. Temisan Omatseye, noted that the NTP was already at an advanced stage and a strategy for its implementation already in place, therefore the need to embed the NMTP in it to make it more comprehensive.

Earlier at the opening session, the NIMASA Director-General, Dr. Dakuku Peterside, had stated that a national policy on maritime and cooperation among industry stakeholders would place the sector in vantage position to lead economic growth.

Peterside, who was represented by the NIMASA Head of Planning, Research and Data Management Services, Mrs. Ronke Thomas, said it was customary for the agency to engage stakeholders, especially over documents that would benefit the sector.

This will ensure “that the sector is stakeholders-driven,” a statement by the NIMASA Head of Corporate Communications, Isichei Osamgbi, cited Peterside to say.

“We feel this document would benefit all the players in the industry and that is why we have gathered you here to make input, so that we will be on the same page when it is time for the implementation of the content.”