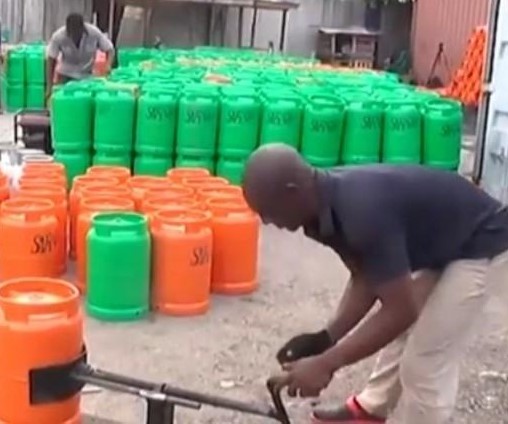 Sub-standard Liquefied Petroleum Gas (cooking gas) cylinders and roofing sheets worth over N450 million have been destroyed by the Standards Organisation of Nigeria (SON) over safety concerns.

SON said that being fake, the products, which were mopped up from warehouses after their import from China and Turkey, failed its laboratory tests for standards and were unfit for use. They equally had no SONCAP certificates for importation into Nigeria.

They items include 4×40 containers of LPG cylinders of various sizes, 15 rolls of aluminium roofing sheets and 15 bundles of fake corrugated roofing sheets.

The agency’s Director, Compliance and Inspectorate, Obiora Manafa, who represented the Director-General, Osita Aboloma, said during the destruction of the items in Lagos that “these products have failed our laboratory test, as such they are substandard and dangerous to users.

“We are not happy destroying peoples’ goods because it costs huge money to buy and import, but we cannot compromise safety and endanger the lives of innocent citizens because of money.”

According to Manafa, “most of these products were discovered when SON raided the warehouses and found them to be substandard. They did not come with SONCAP. SON is not in the ports, so it is difficult to really know whether they are from seaports or border posts.

“Most of them, when we raid their warehouses, will abandon the goods and flee because there are no documents to show from which port they really came from. Also, most times, the suspects disappear once we intercept the products, but we always continue the investigation to arrest them.”

He further explained that after the products have been destroyed, they are sold to recycling firms and the proceeds remitted to government’s Treasury Single Account (TSA).

Meanwhile, the Group Head, LPG, Nwaoma Olujie, has urged Nigerians intending to buy cylinders to look out for its country of origin, address of the manufacturer and date of manufacture.

According to him, “those are the most important features of a genuine cylinder, and any cylinder that does not have them is fake. The lifespan of an LPG cylinder is 15 years, the period it lasted before you bought it inclusive.”