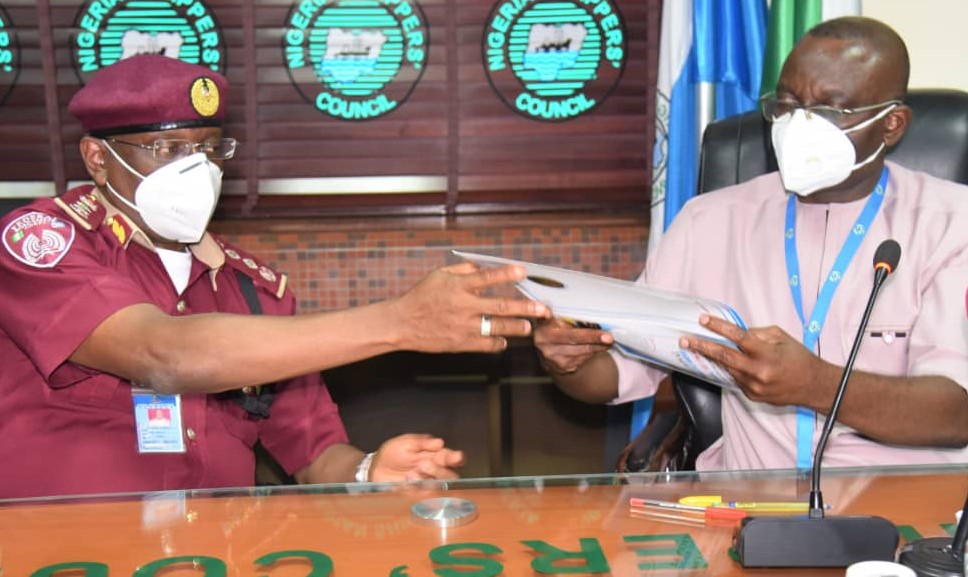 As part of programmes to achieve safer highways in the country, the Nigerian Shippers’ Council (NSC) and the Federal Road Safety Commission (FRSC) are set to implement quality standards for articulated trucks used in the maritime sector.

NSC Executive Secretary/Chief Executive Officer, Emmanuel Jime, gave the assurance during a courtesy visit to the agency in Lagos by the FRSC team led by the Corps Marshal, Dr. Boboye Oyeyemi.

“Within the council’s mandate as Port Economic Regulator and trade facilitation agency, we identify critical issues challenging the performance of our nation’s logistics sector and the growth of our international trade,” he stated.

“In response to them, the council has identified collaborative partnerships with relevant government agencies and the Organised Private Sector as key to solutions.”

He acknowledged that both agencies, since the time of his predecessor, Hassan Bello, already have great strides in the ongoing partnership, as evident in their development and operations of critical transport infrastructure, particularly the Inland Dry Ports (IDPs) and Vehicle Transit Areas (VTAs).

Jime added: “The resolutions reached at the meeting with stakeholders in May 2021 have given further impetus to the collaborative partnership between the council and the FRSC.”

This is “especially as they relate to the development of a structural and sustainable haulage system, the standardisation of trucks as it concerns the implementation of Road Transport Safety Standardisation Scheme RTSSS) and Inter-State Road Transit (ISRT) Scheme.”

Other areas include a joint awareness programme for truck owners and drivers on the use of reflective tapes.

On his part, Oyeyemi regretted the continuous breakdown of trucks on the ports access roads as one of the issues causing congestion, stating that all vehicles causing congestion in Apapa and Tin Can Island Port roads are detrimental to other road users and should be removed.

According to him, it is gratifying that the FRSC was working with the NSC on RTSSS, supporting the development of the council’s transport infrastructure projects, especially the inland dry ports and truck transit parks, sensitisation/enlightenment programmes for truckers, among others.