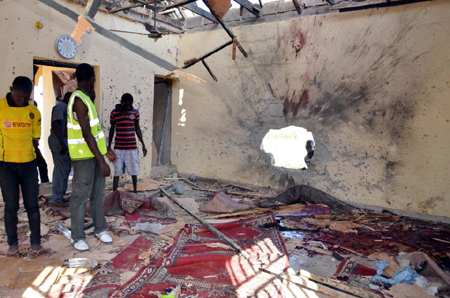 Suspected members of the Boko Haram sect struck inside a mosque in the Konduga area of Borno state on Monday, killing seven worshippers. Bello Danbatta, an official of the State Emergency Management Agency(SEMA), who disclosed this, said the incident occurred around 5:30am. Danbatta said the explosion destroyed the mosque and made it difficult to rescue the victims on time. Those who sustained injuries in the incident were taken to the Borno State Specialist Hospital for medical attention. “The victims were covered with sand. Our rescue team with help of the locals in the area had to make extra ordinary effort to rescue the victims,” he said. Boko Haram has continued to hit soft targets in its violent campaign. Efforts of government to put the sect in check has not yielded the desired result. Last week, the military arrested one Abubakar Kori who reportedly confessed facilitating suicide bombing activities of the sect. He said he was paid not less than N5,000 for each suicide bomb attack carried out in Maiduguri. “My role is to keep the Improvised Explosive Device (IEDs) for onward delivery to another person who will carry out the attack,” NAN quoted him to have said. “On different occasions, two of my acquaintances gave a parcel to keep for somebody, who will come and take it. “I normally kept the parcel in my duty post; the appointed person would come and picked it; after successful delivery, they paid me N5,000. “We reside in the same neighborhood in Maiduguri; they always told me that the parcel was given to them by one Ba’Adam, and asked me to keep it. They introduced me to Ba’Adam, who is the mastermind of the attacks.”
Post Views: 710