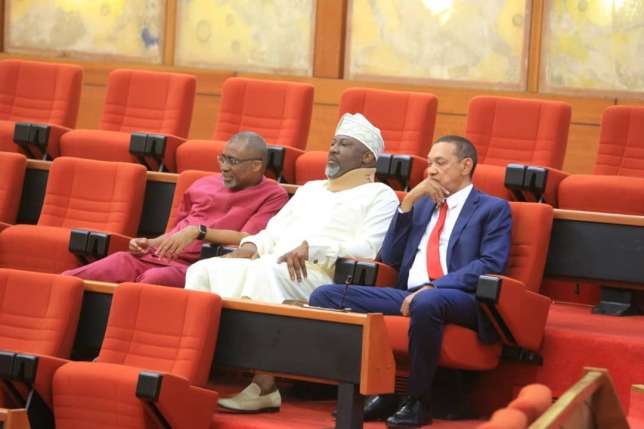 Senators yesterday engaged in war of words over the decision by Senator Dino Melaye (APC, Kogi)  to dump his seat at the side of APC senators and “take refuge” on the side where opposition PDP senators sit. Melaye resumed at the plenary yesterday after being away for weeks following his running battle with the police. Wearing neck brace, he requested that he should be allowed to sit at the side of the PDP. “Mr President, I want to seek your indulgence to call in the sergeant-at-arms to look for a comfortable seat for me on this side of the divide. I am no longer comfortable sitting here (APC side). “I want to ask that you mandate the sergeant-at-arms to look for a seat for me. I will take a seat close to David Mark pending when you get a seat for me,” he said. Immediately after the request, Melaye was assisted by sergeant-at-arms and some of his colleagues to relocate to the side where PDP senators were seated. At the Senate, the APC senators sit on right side while their colleagues of the PDP sit on the left. Melaye  also alleged that  the Nigeria police attempted to kill him twice through the application of a chemical substance and injection. His action was trailed by a point order by the Senate Leader, Ahmad Lawan (APC, Yobe), who said Melaye remained on the APC side. He said  seats on the APC side were more comfortable and well arranged. “If his seat has problem, we can find any other for him including my seat,” he said. Senators Jibrin Barau (APC, Kano), Kabir Marafa (APC, Zamfara) and the Chief Whip, Olusola Adeyeye (APC, Osun) all backed Lawan’s position, citing  the country’s Constitution and the Senate rules. The Deputy Senate president, Ike Ekweremadu (PDP, Enugu) said Melaye’s request was a constitutional matter and  as such it should be granted. The minority leader, Goodswill Akpabio (PDP, Akwa Ibom) supported Ekweremadu’s argument. The Senate President, Bukola Saraki said the issue raised by Melaye had nothing to do with change of allegiance, saying the request of Melaye would be granted pending when his seat at the APC side would be comfortable for him. The APC spokesman, Bolaji Abdullahi said the party respects Melaye’s right to associate with anyone. He said “We respect his right of association and wish him good luck.”
Post Views: 863