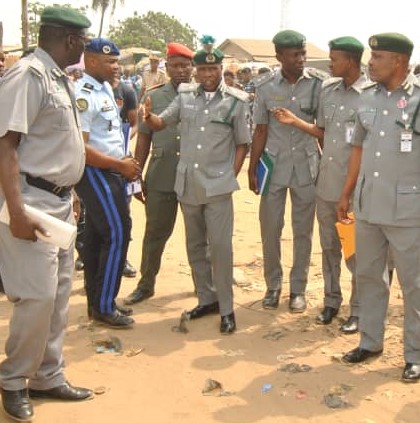 The Seme Area Command of the Nigeria Customs Service (NCS) generated an approximate total of N9.25 from both revenue and seizures in 2018, N6.3 billion (about 76 per cent of the command’s allocated target) of which was direct revenue generation.

Its enforcement unit against smuggling and non-compliant trade also effectively combated smuggling activities, leading to a total of 1,119 seizures with a Duty Paid Value (DPV) of approximately N1.4 billion. The seizures included 37,568 bags of 50kg foreign rice (equivalent to over 63 trailers), with DPV of N876.1 million.

According to a statement by the Customs Public Relation Officer, Saidu Nuruddeen Abdullahi, other unit renditions included export, with a total Free On Board (FOB) value of goods worth N14.6 million and a total NESS payment of N73.1 million.

Meanwhile, the Customs Area Controller, Compt. Mohammed Uba Garba, insisted that command would deploy more strategies to block all revenue leakages, while stakeholders who are ready to comply with proper procedures and guidelines would be adequately sensitised to take advantage of the legitimate process in their transactions. Uba assured that the command would explore all legitimate avenues to surpass its 2019 assigned target as the newly inaugurated Joint Border Post begins operations, adding that he would continue sanitise the border command to meet with other international standards, even as he warned officers and men of the command not to remain committed to government’s fiscal policies.