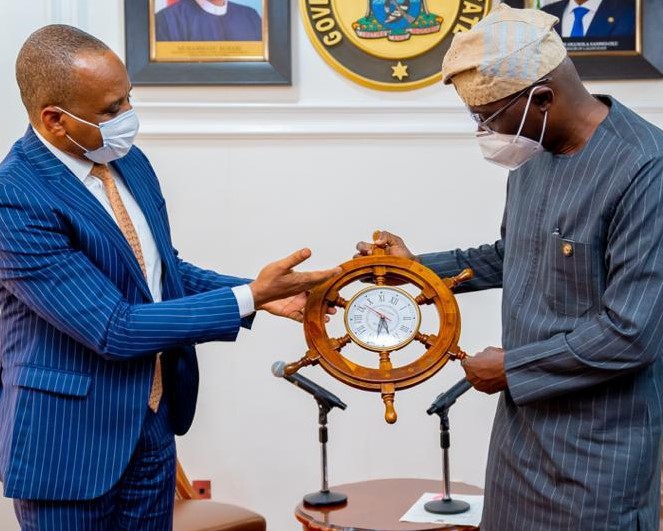 Lagos State Governor, Babajide Sanwo-Olu, has called for improved certification regime for boat skippers and better regulation of the operations of non-convention vessels that operate in the nation’s inland waterways.

He spoke during a working visit by the Director-General of the Nigerian Maritime Administration and Safety Agency (NIMASA), Dr Bashir Jamoh, noting that an improved utilisation of the Lagos waterways would ease the traffic congestion on roads in the state.

Jamoh had informed the governor of the agency’s desire to effectively collaborate with the state in capacity development to improve maritime regulation and promote the blue economy, which has the capacity of creating wealth for the nation.

Sanwo-Olu noted that the training and certification of operators of non-conventional vessels operating on inland waterways was key to improving the safety of operations.

While stating that the state was close to delivering 15 new jetties and terminals to enhance waterways transportation, he called on NIMASA to consider partnering the private sector for a more effective regulation and certification of small boat operators.

“We know NIMASA has done well in regulating the operations of large vessels calling at our waters, which is very necessary for the nation’s economic wellbeing,” he noted.

“Considering the activities of small craft in our inland waterways, we in Lagos desire improved regulation of operations in terms of certification, which comes directly under NIMASA.

“You may consider partnering the private sector under your strict supervision to improve certification of operators on our inland waterways. Fifteen new jetties and terminals being constructed by the state government will soon be ready for use.”

He further listed water hyacinth management, wreck removal and deep seaport operations as areas that Lagos and NIMASA could collaborate in to ensure that Nigeria benefits more from the blue economy, while indicating the state’s interest in hosting the campus of a maritime academy.

On his part, Jamoh identified areas of collaboration to include human capacity development, fishing industry development and marine waste management, all geared towards harnessing the nation’s potentials in the blue economy.

Jamoh added that “NIMASA needs alliances to develop policies that would ensure Nigeria effectively harnesses her potentials in the blue economy. Lagos State has comparative advantage over other states in Nigeria and we are willing and ready to partner Lagos State Government.”