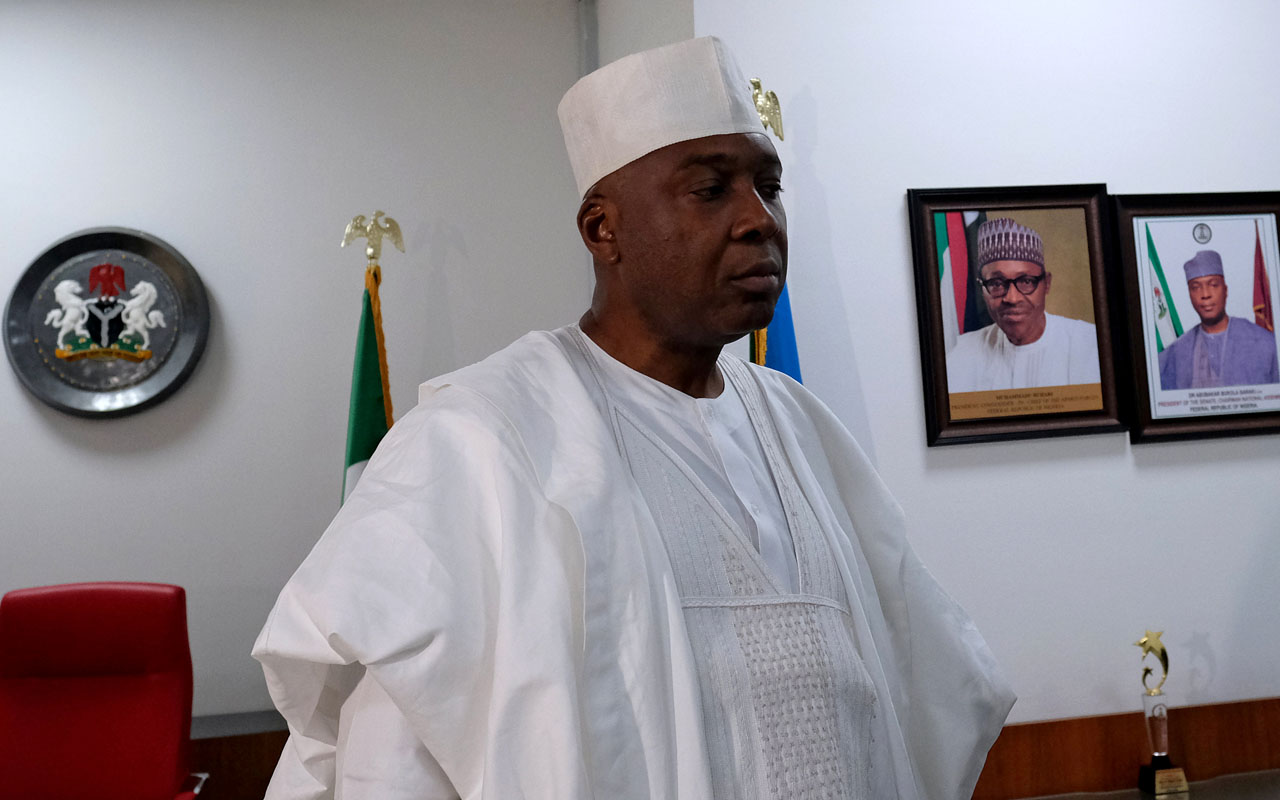 There is a plot to forcibly reconvene the Senate and impeach its president, Bukola Saraki, the Reformed All Progressives Congress (R-APC) alleged yesterday.     National publicity secretary, Prince Kassim Afegbua, in a statement, claimed the chairman of the All Progressives Congress (APC), Adams Oshiomhole, Justice Minister Abubakar Malami and Secretary to the Government of the Federation, Boss Mustapha were the masterminds.     The Peoples Democratic Party (PDP), yesterday, also warned against an illegal takeover of the National Assembly.   R-APC claimed the trio held a meeting on the matter at the Maitama residence of Oshiomhole on Thursday.     It said: “Having met a brickwall, going by the legal processes involved before the Senate can be re-opened, the disputed APC leadership is toiling with the barbaric idea of forcefully opening the National Assembly, reconvening the Senate and using the senators of the APC to preside over the planned impeachment.     Senator Abdullahi Adamu has been penciled down to succeed Saraki, amid a host of other changes in the principal officers.     “Once the leadership is overthrown in a coup d’état manner, the Senate will immediately consider the virement budget of the Independent National Electoral Commission (INEC) and also approve the pending nominations in the Senate.     Part of the plot was to reach out to some PDP senators, especially those who have Economic and Financial Crimes Commission queries, in order to give them a clean bill of health once they defect to the APC.     They also agreed to woo some senators with the sum of N50 million.”     R-APC, therefore, called on Acting President Yemi Osinbajo to “call these persons to order, to avoid a needless breakdown of law and order.     This idea of wrongfully deploying the Nigeria Police Force against the people they were meant to protect has made us mere object of ridicule in the eyes of the world.”     But reacting, APC Acting National Publicity Secretary Yekini Nabena, described the allegation as the “cry of a drowning man.”     He said: “The reason most of them are defecting is because the President Buhari-led administration is not sharing money, which is the PDP philosophy.     This administration cannot inject taxpayers’ money into impeaching the president of the Senate or the speaker of the House of Representatives. This is a serious government and not a dead party called the PDP.”     The PDP’s spokesman, Kola Ologbondiyan, raised the alarm over “another plot by the APC and its agents to flood the National Assembly with armed plain-clothed security operatives, to compromise the security architecture and enable the forceful takeover of the leadership by minority APC senators.”   The PDP warned: “Any attempt to tempt the will of the people in this direction is a clear recipe for very serious crisis.”     Sources close to the National Assembly leadership, meanwhile, have confirmed that the Senate will not re-open plenary before the expiration of its September 26, 2018 adjournment.     The disclosure came after the Senior Special Adviser to the President on National Assembly Matters, Ita Enang, implored the lawmakers to call off their break and attend to matters of urgent importance, including granting legislative approval for N242 billion to finance the 2019 elections.     “I can tell you that some people are just hiding under the cover of elections budget to make mischief.     They have an original motive, which they cannot disclose because the motive is evil.     We all know that INEC has subsisting funds in the 2018 budget, which they can use for any preliminary logistics before the National Assembly resumes in September”.     Also, the chairman of the House of Representatives committee on budget research and documentation, Timothy Golu (PDP, Plateau), doubted the sincerity of the call to reconvene the Senate, saying it smacked of mischief.     But Emmanuel Agbonayinnma (APC, Edo), noted: “Our goal is to promote anything that is in the interest of the nation.”     This came as the Conference of Speakers of States Legislatures “adopted the report of its special committee set up to facilitate an efficient and effective implementation of the financial autonomy law for the state legislatures and the judiciary.”     The chairman, electoral and communiqué drafting committee, Ahmed Guni, made the disclosure in Lagos.     The conference also elected the speaker of the Lagos State House of Assembly, Mudashiru Obasa, as new chairman.
Post Views: 976