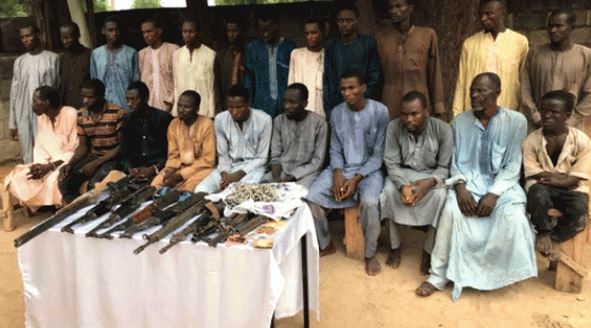 Four years after the 276 schoolgirls were abducted from their hostel at the Government Secondary School, Chibok, Borno State by Boko Haram insurgents, the Police on Wednesday paraded eight men allegedly involved in the crime. The eight persons were paraded alongside 14 others for alleged terrorism. Parading the suspects before journalists, the Borno State Commissioner of Police, Damian Chukwu, explained that the 22 were arrested in Borno and Yobe states. He said their arrest was as a result of the gallantry of the Inspector-General of Police’s Intelligence Response Team (IRT) led by DCP Abba Kyari. Chukwu, who jointly addressed the press conference with DCP Abba Kyari, said he was pleased to parade the 22 dreaded members of the Boko Haram terrorist group who were allegedly involved in various crimes including the kidnapping of the Chibok schoolgirls and over 50 suicide bombings within Borno and Adamawa states. They were also allegedly involved in the invasion of Bama and Gwoza; several attacks/ambush and killing of thousands of innocent Nigerians including security operatives in Borno and other north-eastern states of Nigeria. He said, “Irked and worried by the persistent suicide bombings and killing of innocent citizens in the North-East by the dreaded Boko Haram terrorist group terrorising north-eastern Nigeria, IG Ibrahim Idris equipped and deployed the Special Operatives of the IG Intelligence Response Team, IRT, with enough credible technical intelligence to Maiduguri, Borno State to trace and arrest all the terrorists responsible for the suicide bombings and other terrorist attacks in the North-East.” He said thousands of the Police Mobile Force and Counter Terrorist Unit personnel, the Police Bomb Squad, the Police Air Wing, the Federal Special Anti-Robbery Squad, Conventional Police personnel, the Force Criminal Intelligence Department, the Police Terrorism Investigation Centre and other support detachments of the Force attached to Operation Lafiya Dole were all deployed to achieve the success. On his part, Kyari said, “After a lot of planning and use of advanced technology between 04/07/18 and 09/07/18, IRT Special Teams With Support from SARS crack team of the Borno State Command swung into action and eventually succeeded in arresting 22 confirmed Boko Haram terrorists who confessed to several suicide bombings within Borno and Adamawa states, kidnapping of the Chibok schoolgirls and invasion of Bama/Gwoza among many other crimes. “Suspects narrated various roles each of them played. Amongst them are the commanders and coordinators of suicide bombings in Borno State, Coordinator and members of the Chibok schoolgirls kidnapping, ambushes on security agents, logistic suppliers and their receivers of gold, international currencies, cows etc.” Suspects arrested are Mayinta Modu, Adam Mohammed, Gujja Jidda, Mamman Wardi, Alhaji Modu Jidda, Ajiri Bulama Dungus, Mohammed Abba, Fannami Mustapha, Adam Mustapha, Mustapha Kanimbu and Ibrahim Mala. Others are Abdullahi Mohammed Gawi, Maina Adam, Wano Musa, Ishaka Musa, Abubakar Mohammed, Usman Umar, Maina Abba, Maina Gambo, Abubakar Kori, Bukar Abatcha and Muhammad Bashir. He said, “All suspects arrested have confessed to be masterminds of several attacks and suicide bombings in Baga Road, 3-3, Custom, Bulunkutu, Post Office, Muna, Kasuwan Shanu, Dalori IDP camp etc in Maiduguri and many suicide attacks in Adamawa State, killing of thousands of innocent Nigerians including ambush on security agents and civilians in many parts of the North-East. “Suspects are helping the operatives with useful information to arrest the other fleeing Boko Haram terrorist commanders.”
Post Views: 856