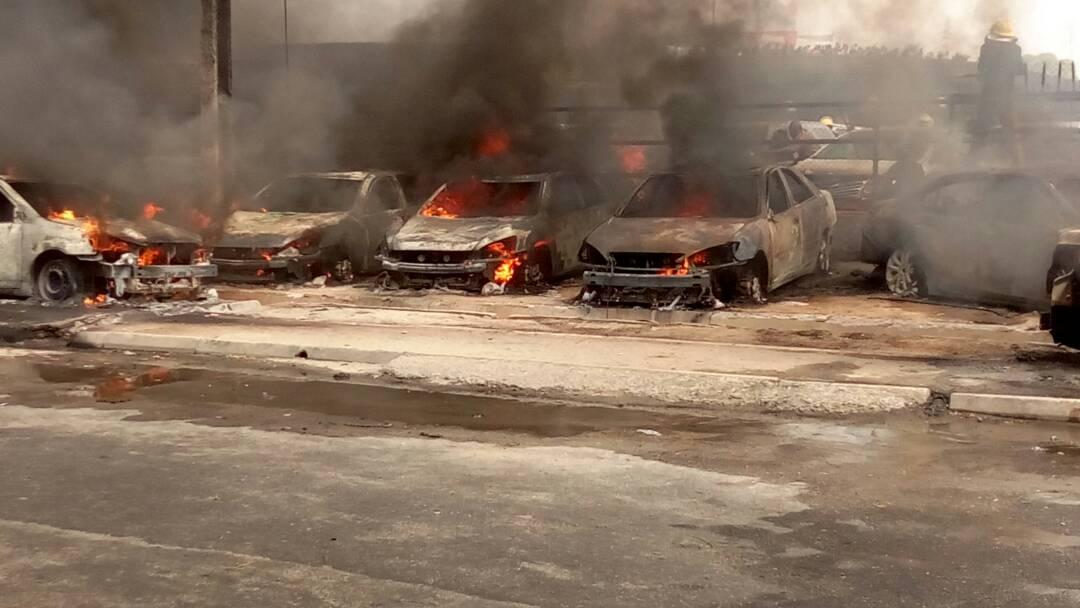 Passengers and other road users at the Fastac link-bridge in Lagos narrowly escaped death Wednesday after a loaded tanker fell and exploded at the spot, leaving no fewer than 11 vehicles completely razed, including eight in an auto mart, and many more severely damaged. Though no life was yet reported lost, casualties in the incident included a furniture workshop and a travel-bag sales shop, which were completely razed, as well as a car, two commercial busses and three commercial motorcycles, which were hurriedly abandoned on the road in the ensuing confusion after the explosion. Also seriously charred by the fire that lasted over an hour was the link-bridge, just as the inferno charred the electricity poles and overhead cables laid last week by the Eko Electricity Distribution Company to address the over three-week outage in sections of Festac. According to eye-witnesses, the diesel-laden tanker failed break on approaching the bridge. Losing control in the process, the driver and assistant were said to have jumped out of the truck, which then hit the road median and fell at the entrance to the bridge. Immediately, the content began to drain unto the road and the surroundings, while the vehicles at the spot started turning frantically to escape the impending danger, leading to chaos, and a few minutes later the whole environment exploded in a raging fire, sending a thick pal of smoke into the atmosphere. The incident cut off traffic into and out of Festac Town on that route, resulting in heavy gridlock on the Festac-Mile 2 route. Unfortunately, the fire had raged for over 30 minutes before the Festac Federal Fire Service arrived with little water and made no significant impact. It took over 20 more minutes before the Lagos State Fire Service, which was alerted by the Chairman of Amuwo Odofin Local Council, Mr. Valentine Buraimoh, arrived to help put out the fire, which by then had already significantly damaged over 10 additional vehicles in the auto mart.
Post Views: 1,041