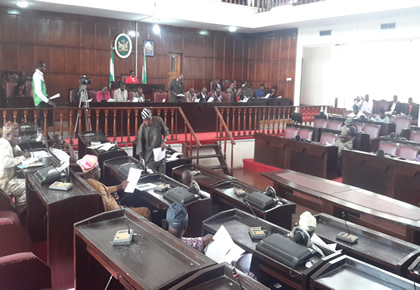 Disagreement in Ondo state House of Assembly on Wednesday morning as lawmakers allegedly exchanged blows over the Tuesday impeachment of the former Deputy Speaker of the Assembly, Hon. Iroju Ogundeji.

It was gathered that one of the lawmakers allegedly punched the impeached Deputy Speaker in the process. The lawmakers who converged and were preparing to meet for a parliamentary meeting before the plenary when a hot argument ensued among them. It is understood that the heated disagreement was from the directives of the state governor, Mr. Rotimi Akeredolu, who waded into the matter and urged lawmakers to reverse their decision on the impeached Deputy Speaker, but the majority of the lawmakers insisted that the decision cannot be rescinded. The lawmakers warned the Speaker of the House, Rt Hon Bamidele Oleyelogun, against the move to revert the impeachment of Ogundeji and threatened to impeach the Speaker, if the decision is reversed.
Post Views: 996