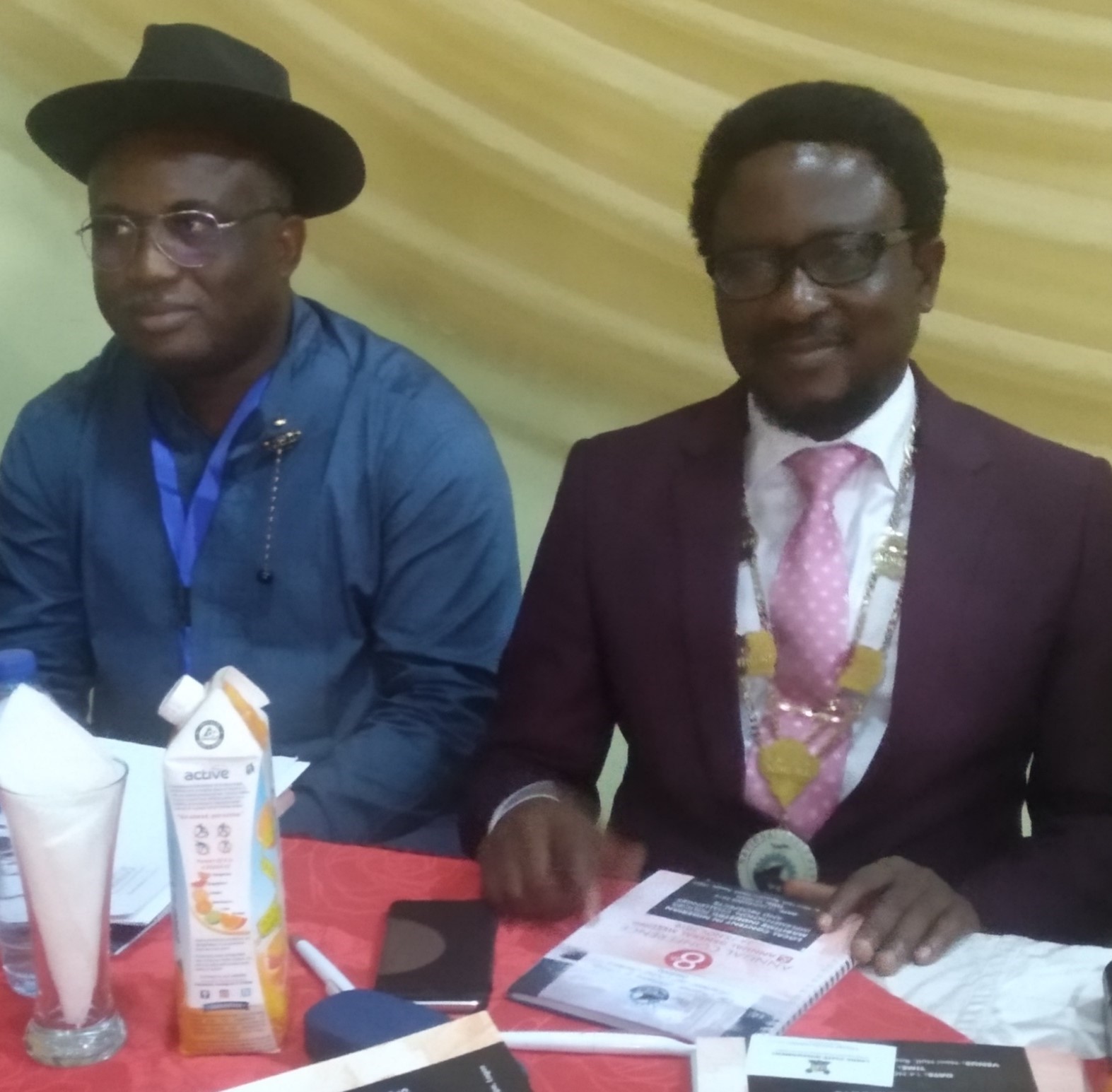 NIMENA Chairman, Henry Unuigbe (right), with a guest during the conference in Lagos

The absence of large shipbuilding yards for the construction of Floating Production Storage and Offloading (FPSO) and other large vessels in Nigeria, as well as government’s lip service to the necessary tax incentives to encourage investors, will remain a huge setback to the expected local content gains and other benefits of such facilities.

This was the submission of the Nigerian Institute of Marine Engineers and Naval Architects (NIMENA), as members and other stakeholders lament the nation’s low capacity in ship building/acquisition, against the background of the Local Content provisions, Cabotage Act and the contributory but yet inaccessible Cabotage Vessel Finance Fund (CVFF).

The situation becomes more regrettable as the shipping and logistics subsector of the Nigeria maritime industry is estimated at over $3 billion, while the oil and gas resources from the Niger Delta region accounts for over 90 per cent of the nation’s export and foreign earnings, and over 70 per cent of its total revenue.

Addressing the 8th NIMANA Annual Conference and General Meeting themed, “Local Content in Nigerian Maritime Industry: Policies, Implementation, Challenges and Prospects,” Chairman of the institute, Mr. Henry Unuigbe, noted that the Act required all entities in the nation’s oil and gas industry to do all fabrication and welding activities in-country.

Regrettably, “this was not so in the case of (Total’s) Egina, as part of the project was executed in South Korea. It is noted that a key facility in the construction of projects of that kind, a suitable shipyard, is lacking in Nigeria,” Unuigbe said.

“Whereas sections 47 and 48 of the same Act require making regulation and giving tax incentives to encourage investments in local facilities, we are yet to see how that has helped to grow local shipbuilding capacity.

“For Nigeria to maximise the benefits of such huge projects, emphasis must be placed on encouraging the development of shipbuilding yards large enough to accommodate the construction of facilities like FPSO and other large vessels. The economic value chain such investment will provide for Nigeria is better imagined.”

Meanwhile, he disclosed that NIMENA’s focus is developing local skills and manpower, including building local infrastructure and competitive supplier-base. According to him, every country that has embraced local content concept enjoys the prosperity that accompanies such laudable initiative.

“The economy of such country is controlled by their citizens and their wealth kept within their borders.,” he said, adding that NIMENA would continue to play its role towards taking the industry to the next level.”

On his part, the NCDMB Executive Secretary, represented by Mr. Adewale Adenugba, said the agency was looking at how vessel maintenance could be in Nigeria, instead of sailing to other countries, including near-by Ghana or further away and back.

On incentives for local investment, he said the agency was collaborating with stakeholders to ensure that oil contracts for local vessels are scaled up to about five years, which will enable ship financing and acquisition, rather than the current situation where such contracts barely run for two years.

He further disclosed that all the low voltage cables used in the building of Total’s Egina FPSO were exported from Nigeria to South Korea, as part of local content requirements, because they are superior to the South Korean cables.

According to him, more of such value chain addition would have come to the country if the infrastructure for large vessel construction were available in Nigeria.