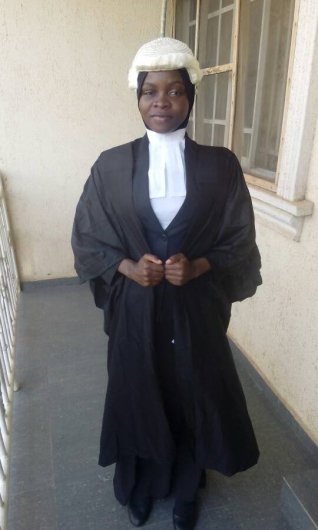 The Social Media is agog with reports of the decision of the Nigerian Law School to formally Call to Bar, a hijab wearing Firdausi Amasa, who was denied the honour last year. Firdaus Amosa The young female lawyer from University of Ilorin was disallowed to perform the ceremony because she refused to remove her hijab. “She will now be given her certificate; a thing of joy, victory to justice, fairness to humanity, Yushua Abdul tweeted. In another, “JUST IN’’ by Abubakar Usman said: “Nigerian Law School: Body Of Benchers Approves Use Of Hijab, Invites Amara Firdaus. “The Body of Benchers has approved the use of hijab during Call to Bar ceremony of young lawyers and that Firdaus Amasa.’’ Muhammed Ayuba tweeted: “Nigeria Law school approved the use of hijab during call to bar and call Amasa Firdous to bar…..Alhamdulillah for this great news.’’ Another tweet by A. A. Sanyaolu ‏ @AAsanyaolu, said: “Hijab approved at law schools in Nigeria, you dey jubilate. That was expected because no such law against it but law school code of conduct. Don’t be too religious about it.’’ According to DawahNigeria @dawahnigeria, News reaching the Muslim Rights Concern (MURIC) on Thursday, 21st of June, 2018 says that Firdaus Amasa, the University of Ilorin Law graduate whose call to bar was denied due to her use of hijab has now been invited to attend the July 2018 call to bar. MURIC took over the young lawyer’s case since last year when she was turned down by authorities of the Law School for the her Call to Bar because was refused to removed her hijab. According to the reports, she would be admitted along with other young lawyers in July in Abuja.
Post Views: 1,389