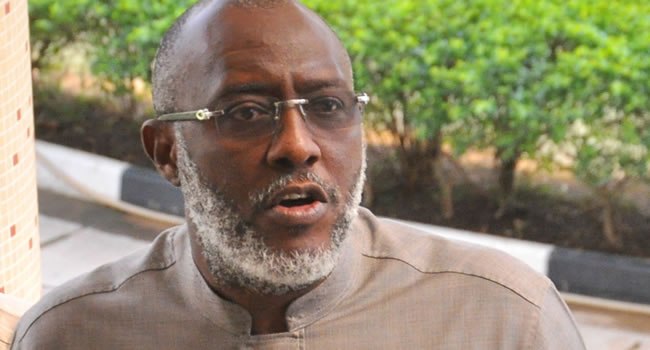 Accuses prosecution of concealing facts THE former National Publicity Secretary, Peoples Democratic Party (PDP), Chief Olisa Metuh, has applied to the Federal High Court to set aside the order closing his case and reopen same to enable him directly testify as well as call the two remaining witnesses already listed to testify. Metuh’s motion contends that the court was misled by the prosecution counsel, who it accused of concealing facts available to him, resulting in the closing of his case. Recall that the court had on May 25, closed the case of the first defendant in the matter, pursuant to an oral application by the prosecution counsel, Mr. Sylvanus Tahir, that Metuh’s counsel was absent in court, and that no reasons were given for his absence and that the first defendant was also not in court. According to a statement issued yesterday by the Media Assistant, Richard Ihediwa, Metuh noted that the application for the reopening of the case is predicated on his averment that the order came despite the fact that two Affidavits of Facts had earlier been filed and served on the prosecution, duly disclosing his whereabouts and that of his counsel. In a motion on notice brought before the court, Metuh, through his lawyers held that the prosecution counsel, while moving his application for the closure of his case, concealed the fact that the first defendant’s counsel, Chief Emeka Etiaba (SAN) had earlier filed and served on him, an affidavit dated May 23 (two days earlier), stating that he was bereaved and would be absent in court on May 25 on account of his bereavement. The motion argued that in the said affidavit, Etiaba had also notified that he had been scheduled to appear before the Supreme Court on a matter on the 24th of May. The document further contended that the Prosecution Counsel, while making his application, concealed that he was also served with another affidavit dated 23rd May and deposed by Obinna Metuh, disclosing that he (Metuh) was still on admission at the National Hospital following his fall in the court on the 21st of May, and that there was a report to that effect from the hospital. Stating that the Prosecution Counsel “acted in bad faith”, the motion argued that “the Prosecution counsel was under a legal duty to disclose the fact that he was served with two sets of Affidavits of Facts from the counsel to the 1st Defendant disclosing the reasons for his absence in court and also the state of health and whereabouts of the 1st Defendant/Applicant..” Furthermore, the motion stated that the lead counsel to the 1st Defendant, Chief Onyechi Ikpeazu, who was unable to be in court due to his indisposition, had not applied to be discharged from the matter. Ikpeazu had undertaken to personally conduct the evidence and to seek no adjournment until the termination of the case if the application is granted. In praying the court to reopen the case to enable Metuh testify, the motion argued that the court “had made it clear that it is only upon the 1st Defendant/Applicant testimony and explaining what he did upon receipt of the sum of N400 million, the subject matter of the charge, that the court may determine whether or not he knows or ought to have known that the sum was a product of an unlawful act.” It also contended that not allowing Metuh to testify and to call the already listed witnesses to testify, particularly, with regard to the transaction involving $2million would be injurious to his case. Metuh’s application also reasoned that the court as presently constituted has the powers to set aside its order closing his case in the general interest of justice and having regard that the court is always called upon to balance the competing rights of both sides of the adversarial system.
Post Views: 833