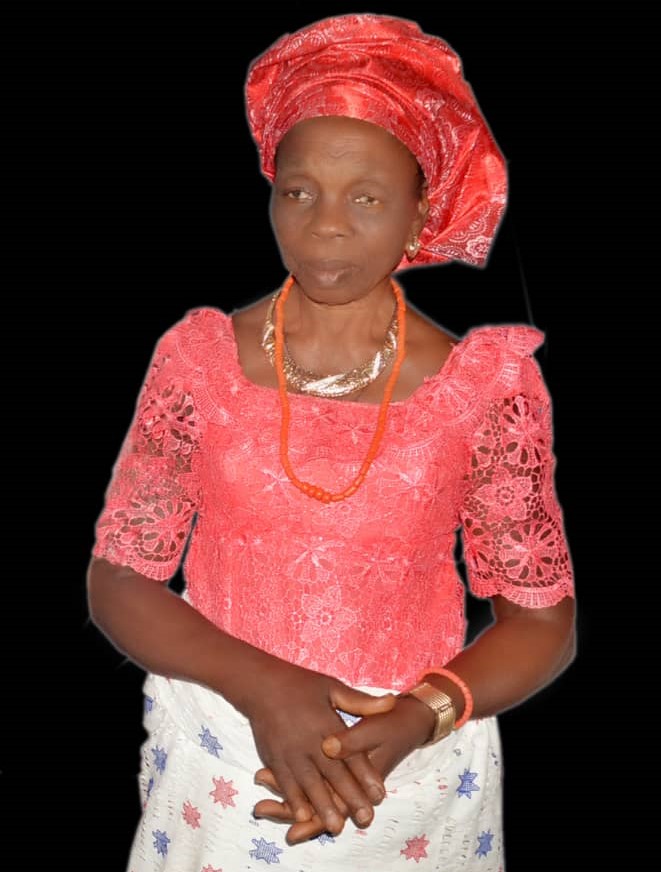 Like most exceptional beings whose births were heralded by signs, a certain bird, Ugbana, was a regular guest to the family compound of Mr. James Mordi and Mrs. Margaret Mordi of Idumu Ozoma clan in Udo Quarters, Ubulu-Uku when Maria Adaeke Ugbana Okafor was born in 1939.

It was from that sign that she got the name, Ugbana.

With her father, James, dying while she was still a toddler, destiny and mixed fortunes would later ensure that while a good number of her mates had the uncommon privilege of attending school, she never saw the four walls of any formal school. Instead, she was the mother’s companion to the farms and in domestic chores.

She would later learn the art of weaving native cloth (akwa ocha), at which she exhibited exceptional talent. She not only made a name and living for herself and family through this but also had to her credit a good number of women who owed their craft and expertise to her tutelage.

When her eldest sister, Mrs. Caroline Umejei (now late) was leaving home for marriage at Idumu Osume, she was given to her as an assist, and because of her humility, submissiveness and their bond of love, she stayed with the family throughout the sister’s child-bearing years before returning in the mid ’60s to prepare for her marriage.

By then, her later-to-be loving and supportive husband, now late Mr. Humphrey Nwachukwu Okafor of Idumubo Quarters, had already spotted her and soon, with the exchange of consent, marriage formalities began and culminated in their wedding in 1966. God blessed that marriage with seven children – Bridget, Rose, Anthony, Chukwukamadu, Iwebunankiti, Philomena and Kanebi. Through these, both later became grand-parents and great grand-parents.

Her journey in marriage was full of trials and troubles from the outset, even to the end. But God also gave her more abundant graces in her husband’s love and eternal commitment to their union; in her children, kindred and friends, among others.

It is to the glory of God that through all misunderstandings between them, neither ever raised a hand against the other, neither were their voices at moments of disagreement heard outside the confines of their house, nor was anyone ever gifted the rare privilege of coming to make peace between them, because disagreements would always fizzle out no sooner than they had started.

As the years wore on, the nights of tears of agony gradually gave way to tears of consolation as the children, repaying her resolve to avenge her lack of education through them, made some appreciable progress in academics and effectively took charge in every aspect of the home.

Prominent among the many legacies she left us is selflessness, charity. We simply learnt from her and her husband to happily share our belongings with others, even when we don’t have enough, because they would even deny themselves to meet the needs of others.

All through the years, we never actually had enough, but we never lacked contentment, nor lost focus by the abundance of those who had.

Her pots of soup were never sacred to outsiders, except those who were not hungry enough. Neighbours and passers-by would always readily gather round our common plates of fufu and soup, some standing at times for want of space.

Communal dining was fun all the time she controlled the kitchen, and even now in our various homes, it remains a cherished culture, which not even Covid-19 has been able to stop.

Community-wise, she remained until death an insuppressible voice for justice, for order, for morality. What she lacked in formal education she made up for in wisdom, experience, uncommon wit, charity and love. Hate or love her, she would have her say, whether or not she had her way. Therefore, to many women, she was naturally a rallying point.

Over the decades, as the pressure of raising the family eased down, she became, among others, a regular feature and highly sought-after presence at the Catholic Women Organisation’s August Meeting (Otu Umunwanne), where she thrilled with her humorous mock news and other drama genres available to them.

Outside that, she continued with her quiet devotion, especially with the Catholic Charismatic Renewal. As at the time of her passing on December 20th, 2020, she was blessed with seven children, including The Guardian’s Ag. Bureau Chief, Abuja, Mrs. Bridget Onochie (Ph.D), and the publisher of themetrofile.com.ng, Tony Nwachukwu, 20 grand-children and four great grand-children.