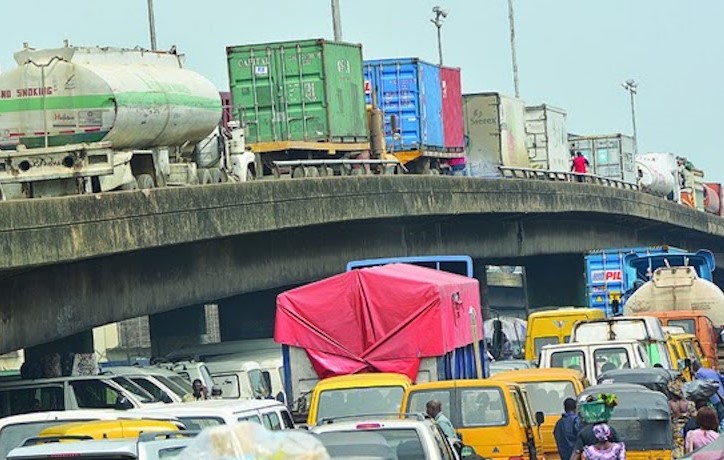 Pic: A common sight at the Wharf-Ijora Bridge end of Apapa, Lagos

For the umpteenth time, the Federal Government has dashed the hopes for the rescheduled April 2020 completion of the Lagos-Ibadan rail project, with the current congestion at the Lagos ports and urbanisation said to be delaying work.

With more cargoes arriving the seaports following the total closure of the land borders to trade since August, businesses, residents and workers in Apapa and environs will have to endure much longer suffering over the port congestion and gridlock, as the earlier scheduled May commissioning and evacuation of cargoes by rail suffers a further setback.

The Minister of Transportation, Chibuike Amaechi, who expressed disappointment at the state of the project during an inspection Monday, noted that the Ebutte-Metta-Apapa port axis of the project remained almost the way it was at his last visit.

“Not much has happened in Abeokuta,” he lamented. “The worst part of the project is Ebutte-Metta to Apapa port. The contractor is giving all sorts of excuses, including complaining that their vessel carrying equipment meant for the project has been stuck amid the congestion issues at the ports.”

Against this background, Amaechi, who noted that the contractors’ vessel was “yet to berth due to the long queue at the ports,” said he would be “meeting with the management of the NPA this Thursday or Friday to discuss possible ways out of this.”

The stakeholder-meeting is expected to sort out the proposed demolition of structures inside the port and the April completion dateline. He added: “I have asked the entire management of China Civil Engineering Construction Company to be in the meeting on Thursday, we have to know what the delays are in the ports.”

“In terms of tracks, I give them 100 per cent, apart from Ebutte-Metta to Apapa, where we had to deal with oil pipes while approaching the seaport, so the issue of urbanisation really slowed down work in this section.”