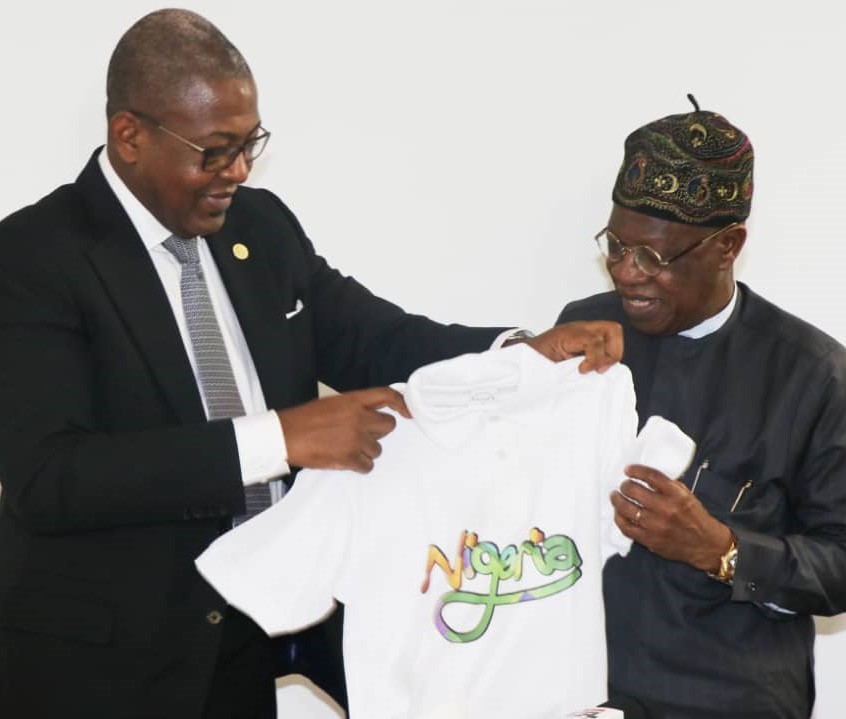 Coker presenting a gift to Mohammed in his office

Tourism could become a major contributor to the nation’s Gross Domestic Product (GDP) if the Nigerian Tourism Development Corporation (NTDC) develops and promotes the sector to attract tourists, the Minister of Information and Culture, Lai Mohammed, has said.

Giving the charge during his working visit to the NTDC Headquarters in Abuja on Tuesday, Mohammed reminded the agency that it is not just the apex organisation for tourism but “actually at the centre of all these tourism activities.

Noting the NTDC’s pivotal role in coordinating all the activities in the sector, and its huge capacity to create employment and contribute immensely to the nation’s GDP, the minister insisted that the agency should see tourism beyond mere sightseeing but the entire creative industry, including film, music, gastronomy, fashion, photography and monuments.

According to him, “there are many reasons people should come to Nigeria. We are a country of colours. We are a country of about 250 ethnic groups, each with its own history and culture, and we are blessed with miles and miles of beaches. We have an almost all-year round good weather.

Regretting that Nigeria’s film industry remained the least harnessed, with 51 cinema houses and fewer than 200 screens for its over 200 million people, he urged synergy between the agency and the ministry to attract investments that will raise the number of cinema houses to 1000 and at least 6000 screens to turn the industry into a money spinner.

“This is where I think the NTDC will need to work even more closely with the ministry so that we can actualize the potentials of this industry and make it not just the fastest growing sector of the economy but also increase its contribution to the GDP from 1.24 per cent to 3 or 3.5 per cent,” he said.

On his part, the NTDC Director-General, Mr. Folorunsho Coker, stressed the need for a legal framework to enable the agency harness the potential of the tourism sector, even as he solicited the ministry’s support, especially in utilising its information platforms, to promote tourism globally.