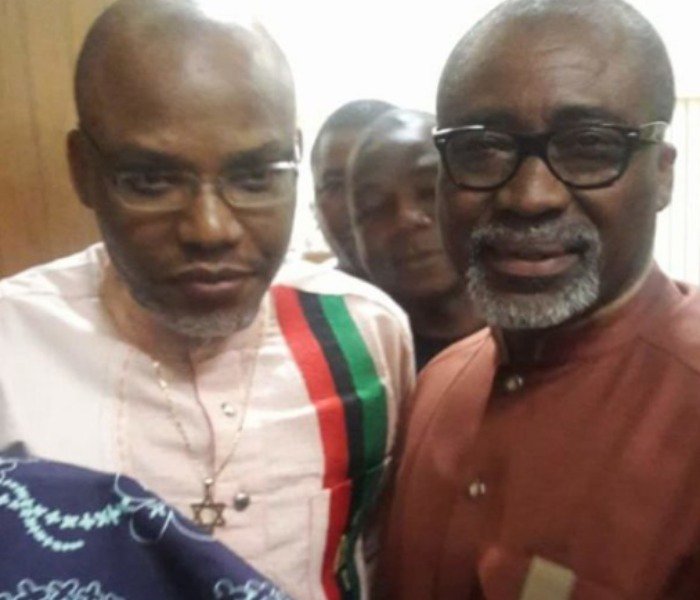 By Chidiebele Nwachukwu Senator Enyinnaya Abaribe has filed an application inviting Justice Binta Nyako of the Federal High Court on an inspection visit to the home of the leader of the Indigenous People of Biafra (IPOB), Mr. Nnamdi Kanu, sequel to the military invasion that led to his disappearance. Dated December 4, 2017, and filed on his behalf by his counsel, Chukwuma-Machukwu Ume (SAN), Abaribe’s motion on notice was brought pursuant to Section 6 (6) (a) (b), 36 (1) of the 1999 Constitution, and Sections 177 (1) and 179 of the Administration of Criminal Justice Act (ACJA) 2015. The motion is seeking the leave of court to visit and make physical inspection of Kanu’s residences at Isiama, Afaraukwu Ibeku in Umuahia, Abia State, after its invasion between September 11 and 14, 2017. Abaribe’s motion alleged eventual arrest and taking away of Kanu by the Nigerian Army following the invasion and occupation of his residence, predicating the claim on the grounds that Kanu was at his residence before and all through September 11 to 14. “Applicant’s agent has on several occasions been prevented by agents of the Nigerian Army (6th respondent) as well as other security agents from accessing the residence of Kanu at (Isiama Afaraukwu Ibeku) to show the court the characters of the invasion and occupation of Kanu’s house and the eventual arrest and taking away of Kanu by the staff and agents of the army,” it read in part. “The applicant is desirous of the court seeing and examining Kanu’s residence, which has been stated as an evidence before the court. The application will help the court and, indeed, the applicant in the determination of his application before this court. “The applicant’s application cannot be determined nor resolved by mere documents as described on the exhibits before the court but by physical inspection of the said property.” According to an affidavit in support of the motion, deposed to by Deborah Warrie, Abaribe offered to stand surety for Kanu and entered into a recognisance and executed the bail bond “out of patriotic consideration of assisting the judicial process to defuse the high tension already generated in the polity, and with full convictions that Kanu was carrying on his activities within the limits and confines of the constitution.” The affidavit also averred that since Kanu’s release from prison custody, he was last seen and known to be in his residence at Isiama Afaraukwu Ibeku. It added that “sometime in 2017 or thereabouts, the Nigerian Army High Command, on the instructions of the Chief of Army Staff, announced publicly that they were going to commence a military operation exercise code named Operation Python Dance in the whole of South East from September 15 to October 14. “Although the invasion took place three months ago, there are still many physical reminders of the invasion and a site visit is the best and most expedient way to convey to this court the necessary information regarding the environs, spatial configurations and physical character of the locations of the invaded property, which information cannot be adequately conveyed through the presentation of oral testimony or topographical maps alone.” According to the deponent, the forceful military invasion of Kanu’s residence frustrated Abaribe’s bail bond, and a visit to the locus quo will enable the court get evidence surrounding the facts of the suit. However, the application was not moved because the trial judge, Justice Nyako, did not sit, and the matter was adjourned till February 20, 2018. Aside the motion, Abaribe had earlier filed an application praying for an order compelling the Chief of Army Staff to offset all expenses he incurred in the cause of Kanu’s trial. He is also demanding an order for payment of N10 million damages to him for the psychological trauma he has gone through following the extra-judicial self-help actions of the Army Chief of Staff. Abaribe is standing surety for Kanu, having signed a N100 million bail bond for Kanu, who is being prosecuted by the Federal Government for alleged treason. In the application, Abaribe sought an order compelling the Chief of Army Staff to produce the 1st defendant/2nd respondent before the court to explain to the satisfaction of the court the circumstances surrounding his whereabouts. “An order of court compelling the Chief of Army Staff to show cause why the Attorney General of the Federation should not be compelled to initiate contempt proceedings against him for his extra-judicial self-help conducts that have obviously frustrated the proceedings and course of administration of justice, and which actions have brought the court to some ridicule and its power nugatory, as well as placing the applicant in a fixed position.” On October 17, 2017, the trial judge, Justice Nyako, had ordered that Abaribe and the other sureties appear on November 20 to show why a bench warrant should not be granted against them. More so, the court held that Abaribe could only be reclused if he produces Kanu or forfeits the N100 m bail bond.
Post Views: 855