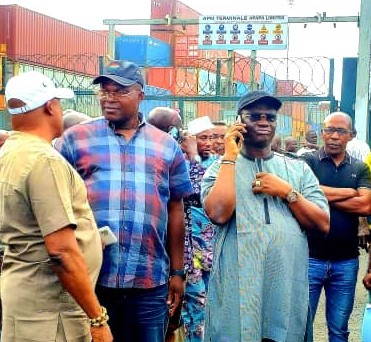 Expectations are high that the blockade of operations at the APM Terminals Apapa by the Maritime Workers Union of Nigeria (MWUN) will end today as the management of the terminal is said to be working on resolving the knotty issues with the union.

MWUN had on Wednesday shut down operations at the terminal – the nation’s largest container port – over allegations of poor wages, disparity in the welfare of members and expatriates, among others.

However, quick resolution of the dispute may depend on the company implementing the advice of the Nigerian Ports Authority (NPA) and the Nigerian Shippers’ Council (NSC) on the union’s grievances.

To avert the impending strike, both regulatory authorities – as Port Landlord/Technical Regulator and Port Economic Regulator respectively – had waded in earlier to prevent disruption of ports operations at the terminal.

Reacting Wednesday to the grounding of business activities at its facility, APM Terminals had described the MWUN action as unexpected, and would affect vessels turnaround and cargo clearance at the terminal.

Nevertheless, it disclosed ongoing discussions with the union towards a quick end to the conflict. Its notice to clients Wednesday, titled, “Notice of Labour Action in APM Terminals Apapa”, read in part: “This is to inform you that APM Terminals Apapa dock employees have embarked on a strike this morning.

“This action is regrettable because the strike began unexpectedly. We recognise that the action would impact our customers, vessels and the terminal, as most operations are impacted by the union’s strike action, causing operational disruptions as a consequence of the lockout.

“However, be assured that there are ongoing deliberations and discussions between the management and the labour union in the hopes of reaching an agreement as quickly as possible.

“With your unwavering support, we will do whatever we can to minimise the impact of the labour action and also keep you abreast of developments.”

On their part, however, the MWUN leadership, led by the President-General, Comrade Adewale Adeyanju, has insisted on continued blockade of the facility unless their demands were met.

According to him, “we sat down six times (with APM Terminal management) on salary review for the workers who have sacrificed for the terminal. We asked them to review workers’ pay and give them proper sense of belonging. All the stakeholders have called them and intervened but they refused.

“We are a very reasonable union, we are aware of the economic situation of Nigeria and the world. We gave them an ultimatum that expired a long time ago, just to give them a window of opportunity to negotiate, but they refused. APM Terminal does not have any regard for Nigerian workers, they believe in divide and rule.”

Currently, “our members have shut down APM Terminals, Apapa. All the examination offices inside the container terminal being used by officials of the Nigeria Customs Service are currently under lock and key by our members.

“The agitation is connected to the refusal of the terminal’s management to review the Collective Bargaining Agreement (CBA) with the workers, which ought to be reviewed every year.

“It is an internal agreement between the workers and the terminal operator, but the operator has refused to review the condition of service this year and that is why everywhere inside the terminal is currently under lock and key. If APM Terminals refuses to meet with us, the shutdown of port operations will continue.”