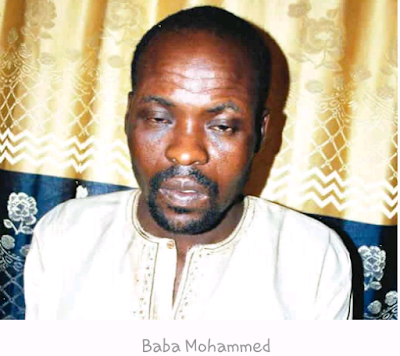 45-year-old man, Baba Mohammed pictured above, has been arrested by the police in Niger state, for allegedly setting his neighbor, Usman Tetengi, ablaze for wooing his fiancée. According to police sources, Mohammed and his fiancee have been in a relationship for a while and already agreed to get married. However, the neighbour Usman who also likes the lady, has been disturbing her to leave Mohammed and follow him. Mohammed got wind of it and gave several warnings to Usman to leave his woman alone. Usman refused. Yesterday, Mohammed ambushed Usman, drenced him with petrol and then set him on fire. He was rushed to the hospital where he died. When interrogated, Mohammed said he doesn’t regret his action.

“I am not regretting my action because if I did not kill him at that particular time, he would have killed me; so let him go, in his next world, he will not join issues with me again. I don’t care where this case will get to, the most important thing is that I have closed his chapter and stopped him from troubling my life. There are other women in our community but he chose to make advances to the woman I proposed to marry. He has paid dearly for it, it served him right.”

Confirming the incident, the spokesperson of the state police command, Muhammad Abubakar, said the victim was rushed to Federal Medical Centre, Bida and was later referred to Gwagwalada Hospital, Abuja where he received treatment until his death. Mohammed will soon be charged to court.
Post Views: 870