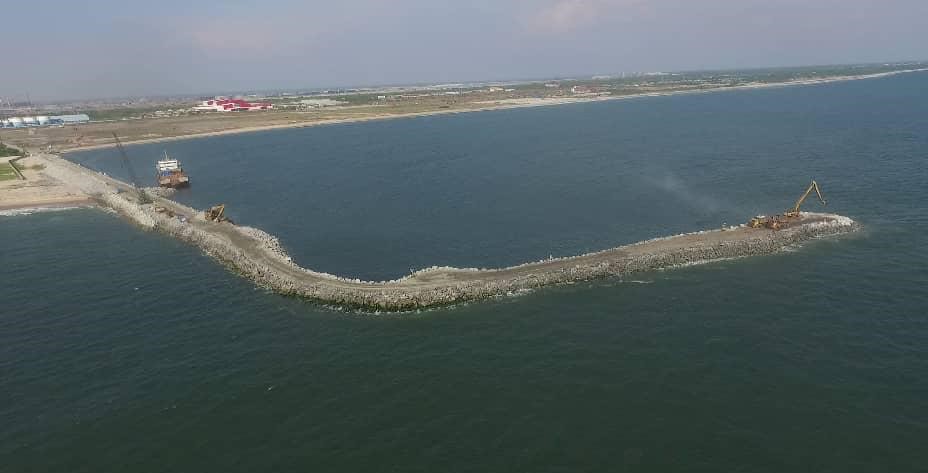 Breakwater construction at the Lekki deep seaport is 50 per cent completed, and the entire port project will be completed next year, while commercial operations begin in 2022, the management has said.

The Technical Director, Steven Heukelom, said in Lagos that when completed, the port would conveniently berth larger vessels of 18, 000 TEUs with its three container-berth of 680metre long and 16.5metre depth, as well as one liquid and one dry bulk terminals.

Describing it as one of the largest and critical parts of port construction, Heukelom disclosed that about one kilometre of the projected 1.9-metre breakwater has been completed. He stated: “We are now almost half way in the breakwater construction.

“We have done 900 metres – close to one kilometre – and the full length will be 1.9 metres. We will also dredge the channels going up – around 11 kilometres long, before we reach the natural depth of 16.5 metres and then we are good to go.

“In phase two, we will put the liquid jetties, while the basin in the channel will be deepened to 19.5 metres. The maximum size of container vessel that we can receive will be 18,000 TEUs. So, having big ships like this in the port will be a game changer.”

Also, the port’s Landside Infrastructure Manager, Kunle Fadunmuye, explained that 30,000 X-blocks were being produced to reduce the wave impact along the breakwater. According to him, “there are three types of X-blocks – the three-meter, two-meter and five-meter.

“We will be having the whole 50 hectares of Lekki Port floor covered with interlocking blocks. Presently, we are doing the dynamic compaction to increase the bearing capacity of the soil.”

He assured that the breakwater being built would stand serious wave impact, adding that groynes were also being constructed to complement the breakwater, which protects the harbour areas from sea waves.

Meanwhile, the Media Counsel/Relationship Group Director, Adesuwa Ladoja, disclosed that the Federal Government and the port promoters were already working to connect the facility sited in the Lekki Free Trade Zone by rail, to avoid the Apapa ports pitfalls.