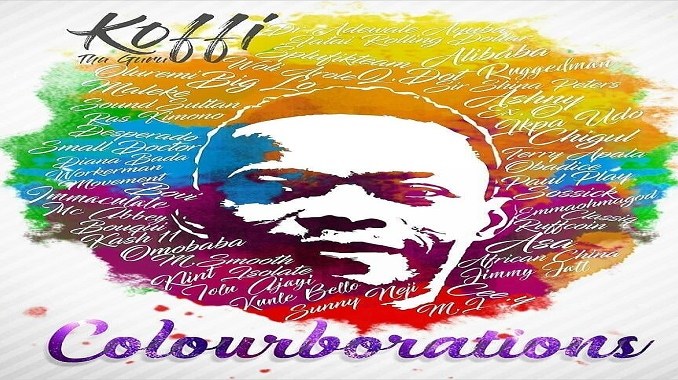 Koffi Tha Guru, Nigerian born to a Togolese mother, has released his13th album titled ‘Colourborations’. The comedian cum singer said that it had been months of laboring, “but finally we can say we have put forth a baby full of colours.” Over 50 acts were featured in the album and it’s the biggest project he has worked on till date. On what fans are to expect from this album, Koffi said ‘‘Music has never been this beautiful, that, I can assure you. The ‘Colourborations’ album begins with the legendary Disc Jockey, DJ Jimmy Jatt taking the intro, Asa doing the outro, MI Abaga rapping in Hausa; this is the only song he has ever done that, Alibaba singing Calypso, Bouqui and the late Fatai Rolling Dollars doing Gospel, Small Doctor and Q-dot bringing homely flows, Kunle Bello going on a Togolese ride with me; these are just a few out of the many pleasant surprises this album is offering.’’ He concluded. ‘Colourborations’ which is arguably the biggest collaborative effort by any entertainer in Africa, also sees Koffi pull a surprise jazzy funk track with Russian Diva, Diana Bada. The 34 track album is currently available on all paid music platform and boasts massive collaborations with other top entertainers such as Sir Shina Peters, Ras Kimono, Paul Play, Ruggedman, Bovi, Sound Sultan, Big Lo, Sunny Neji, 9ice, Ikpa Udo, Chigul, Omobaba, Mc Abbey, Maleke, Obadice, Terry Apala, Ashny, Immaculate Edache, EmmaOhMaGod, Woli Arole, Tolu Ajayi, Classiq, Sossick, Josh2funny, among several others.
Post Views: 1,045