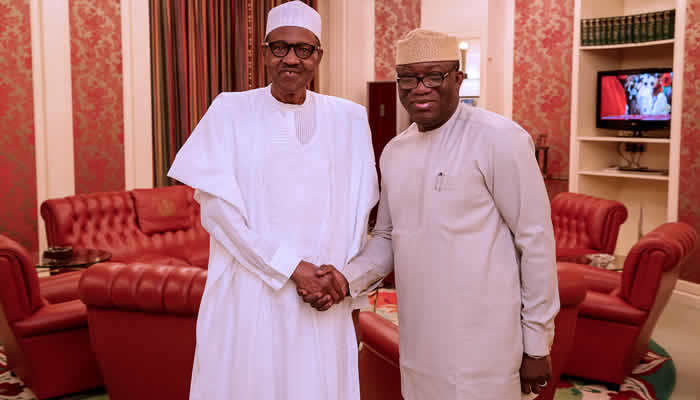 Olalekan Adetayo – Abuja President Muhammadu Buhari on Sunday congratulated his former Minister of Mines and Steel Development,  Dr.  Kayode Fayemi, on winning the Ekiti State governorship election held on Saturday. In a statement by his Special Adviser on Media and Publicity, Mr. Femi Adesina, the President commended the All Progressives Congress’ candidate and all party supporters for what he described as his hard-fought victory after a dignified campaign. “In all this, the people of Ekiti State have spoken loud and clear, and democracy has won again,” the President said. Buhari urged the governor-elect and APC members to be magnanimous in victory as the incoming administration prepares to unfold a new lease of life for the people of the state through purposeful and responsible governance. He commended the people of the state for their matured and peaceful conduct as they made their choice using the power of the ballot. The President also lauded the Independent National Electoral Commission for adequate preparations and for displaying impartiality throughout the process. He applauded security agencies for creating the right atmosphere for the relatively peaceful conduct of the polls and urged them to sustain the peace. Buhari also commended local and international observers and monitors for their vigilance and contributions towards the relatively hitch-free exercise. The statement added, “The President urges the losers to be gallant in conceding defeat and use constitutional means to settle whatever grievances they may have rather than resort to self-help. “President Buhari appeals to all stakeholders in Ekiti State to work towards a successful transition to a new administration in the higher interest of not only the State but the entire nation and its fledgling democratic experience.”
Post Views: 787