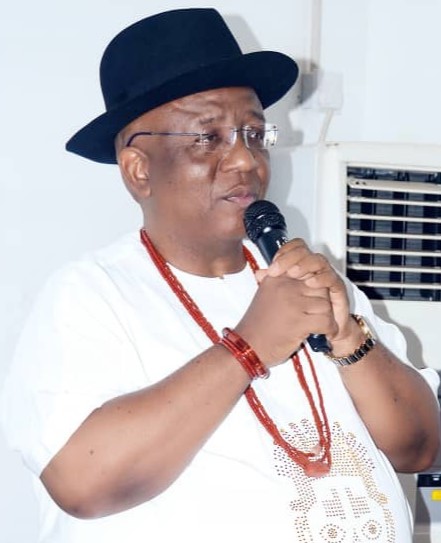 The Chairman/Chief Executive of Richygold Group of Companies, Richard Agbapuru, has urged well-meaning Nigerians and social organisations to always assist the society’s less-privileged, especially widows suffering the loss of their breadwinners, at this difficult times.

He made the appeal while speaking at the end of year party organised by Ugomba United Social Club of Nigeria which held on Sunday in Lagos. Chief Agbapuru who was honoured at the event as the grand patron of the Club was the founding president of the organization.

According to him, Ugomba as a social club was founded by some of them some years ago, precisely in 1986/87 but was officially registered with the Corporate Affairs Commission (CAC) in 1992.  He explained that one of the objectives of founding the club apart from creating happiness for members was to render whatever assistance they could give to less privileged persons in the society irrespective of tribe, religion or sex.

He emphasised that over the years, the Club has been rendering such humanitarian assistance in its modest way just as it has promoted a high degree of oneness amongst members. Going back in history, Agbapuru noted that the Club came into existence when himself and some other business men who used to travel to Onitsha for bulk buying of products for sale in Lagos decided to form an organization that could enhance oneness and happiness amongst members.

In his words, “the club over the years may look small in structure but certainly mighty in action.  Besides creating happiness and promoting oneness amongst members, we have a hotel currently under construction in one of the South East states. When completed, apart from boosting the hospitality business, the hotel would provide employment and business opportunities for many people.”

The grand patron added that the progressiveness of the Club could also be found in the fact that all the pioneer members at the formation of the Club were all bachelors but currently, they are all married with some becoming grandfathers.

To walk his talk towards assisting the less privileged, Chief Agbapuru announced N500,000 gift to the widow of a late member (Paul Okochi) who is currently doing some trading in the South East.   According to him, the money would assist the widow in augmenting her trading capital.

Earlier in his welcome speech, President General of the Club; Mr. Samuel Okoroji commended members for keeping the vision of the Club’s founding fathers alive.

He noted that since the Club came into existence over thirty years ago, it has continued to be of help to members and their families including assistance to less privileged non-members of Ugomba.

As the fifth president general of the Club now in his second four-year term, Okoroji promised that with the support of the club’s grand patron, patrons and other illustrious members, Ugomba United Social Club of Nigeria would occupy a pride of place in the comity of social organisations in Nigeria.

Another highlight of the event was the appointment of two illustrious members of the Club as new Patrons. They included Barr. Paul Obi (a.k.a. Ochendo) and Eze-elect Anuma Ifeanyi (Ezeakuchukwu). Mr. Peter Okochi emerged as newly designated Founder of the Club as Chief Richard Agbapuru (the actual founder) declined to combine the title of Founder with his new position as Grand Patron of the Club.

While congratulating the new patrons, Chief Agbapuru paid special tribute to Barr. Obi whom he said, had diligently facilitated the formal registration of the Club at CAC in its early years even when he had not yet become a member of Ugomba.

The end of year get-together which took place at the event hall of Ojez Hotels and Suites, Ebute Metta was sponsored by a member, Mr. Anthony Onwumere. It attracted most members of the Club with their wives in attendance and other guests.  There was enough to eat and drink just as conviviality pervaded the entire space throughout the occasion.