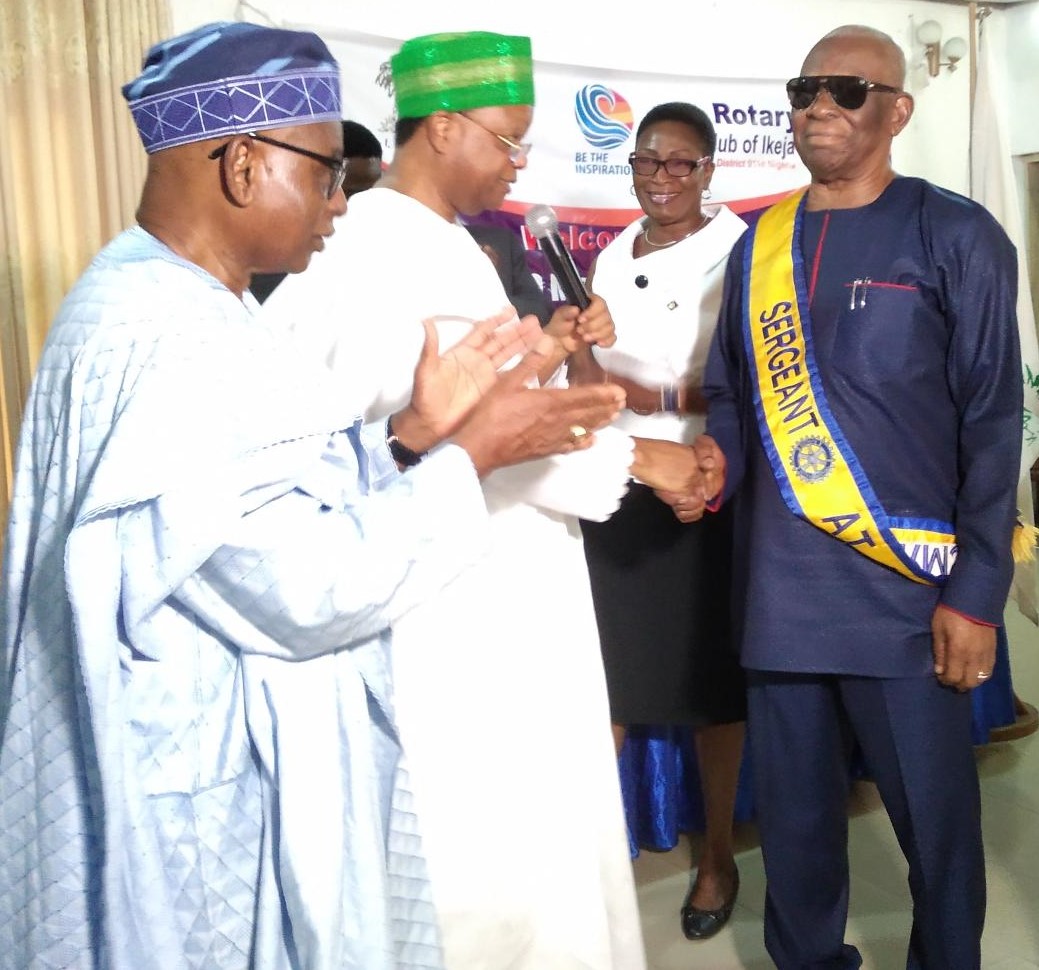 Business magnate and Founder of Elizade University, Ilara-Mokin, Ondo State, Chief Michael Ade-Ojo (right), being decorated as the Sergeant-At-Arms for the day’s event by the Past District Governor and Founder/Chairman of Juli Pharmacy Plc, Prince Julius Adelusi-Adeluyi, while others cheer during the Ikeja Rotary Media Roundtable in Lagos

Towards a family and community-centred approach for a more inclusive and effective conflict resolution in the society, the Ikeja Rotary Club is perfecting arrangementsto train police women from five West African countries in the art of promoting peaceful co-existence.

Disclosing this in Lagos during the club’s media roundtable with the theme, “Discovering the Role of Rotary,” the President, Rot. Adeniyi Adelaja, said the project billed for May, 2019, to be executed in partnership with the Mediators Beyond Borders, will cost the club $99,000.

According to him, the club will invite the Mediators Beyond Borders to train the women in police, five of whom will be selected from each of Nigeria, Republic of Benin, Sierra-Leon, Liberia and Ghana for the peace and conflict resolution training within communities.

In the second leg, the club is “looking at adopting the women of the Nigeria Police Force for this training to acquire skills on conflict resolution, which is the basic job of the police. Their engagement and interview processes are through our communities,” Adelaja said.

“We believe that when conflicts spring up in the communities, men are always not around. So, if you have champions of women on ground who can quickly quench the fire of conflict, those five community women will now go back and train others in a train-the-trainer format.”

Meanwhile, the club has condemned as very uncharitable the misunderstanding of rotary movement as occult rather than a true model of humility and selfless service towards the uplift of the society.

Reacting to the cult notion, business magnate and Founder of Elizade University in Ondo State, Chief Michael Ade-Ojo, said “it is unfair. Rotary does not do anything unethical. It is not fair to imagine or imply that what we do in rotary is occult. I don’t hold membership of any cult, and will never in my life.”

For the founder and Chairman of Juli Pharmacy Plc, Prince Julius Adelusi-Adeluyi, “any society that has limitations seems to be suspect, and we have rules that are very strict, set as far back as 1910. In those days, women were not allowed to participate, till the 80s, but have now become very important in the district.”

Nevertheless, “rotary is not for the elite. If you have time, if you have talent, somehow your treasure can be taken care of. I believe it is not about being a rich person;

“I also believe we should let people know that anybody can apply. That is why we have classifications. The publishers and journalists can join and have the opportunity to learn more, because now we have e-publishing, and we can have a classification there.”

Though rotary is apolitical, he called on the Nigerian leadership to adopt the famous 4-Way Test to achieve good governance, as is happening in sane societies across the world, noting: “From Manilla in the Philippines all the way to Uruguay, people are applying the 4-Way Test, and there is no reason we cannot make the media do this here.

“Can you imagine if our leaders today follow the tenets of the 4-Way Test – whatever you say, whatever you think, whatever you do, based on four questions – is it the truth (how many people are speaking the truth today in politics)? Is it fair to all concerned (or are you just out there to kill them in order to have votes)? Will it build goodwill? and, will it be beneficial to all concerned?”