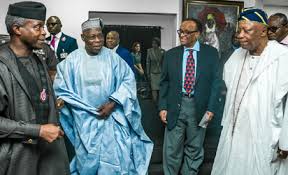 Vice President Yemi Osinbajo has assured that the Federal Government would continue to provide private investors with incentives to encourage more investments across all sectors of the economy. Osinbajo gave the assurance Tuesday while commissioning Petrolex’s $6 billion 300 million litres tank farm at Ibefun, Ogun State, stating that such incentives would encourage indigenous investors to strive in the country. He further disclosed that the Federal Government would soon announce a new interest rate, specifically to encourage the manufacturing sector access to loan to boost economic activities, adding that the modalities were already being worked out, as the sector is key to resetting the economy. According to him, President Muhammadu Buhari has directed them to develop a framework that will provide manufacturers access to fund at affordable rate, to motivate the sector to boost the capacity to trigger economic activities. Osinbajo further commended the firm for developing an integrated energy mega city capable of transforming the nation’s oil and gas landscape, noting that its size and scope will help the country meet its petroleum products needs in 2018 and reduce by 20 per cent domestic petrol need by first quarter of 2019. According to him, the facility will not only ease petroleum products supply and distribution but also create jobs and trigger economic activities across the state. On his part, ex-President Olusegun Obasanjo urged a robust public, private sector collaboration, stressing that no private business can thrive without public sector support. To that end, he urged all tiers of government to support indigenous companies, and by so doing develop the socio-economic environment. Equally, the Group Managing Director, Nigerian National Petroleum Corporation (NNPC), Dr. Maikanti Baru, said the investment clearly testified to the ingenuity of indigenous companies and demonstrates their capacity to support government’s reforms. Baru promised to fully support the company to realise its set objectives, as the investment will help achieve uninterrupted products distribution. He reiterated that government had no intention to increase petrol pump price, stating that such fears caused marketers to hoard fuel, which led to the product scarcity nationwide. To check the trend, he said the Department of Petroleum Resources (DPR) would henceforth monitor product sales nationwide and dispense free-of-charge products hoarded by marketers. Meanwhile, the Chairman of Petrolex Group, Mr. Segun Adebutu, disclosed that the facility would host 250,000 barrels per day capacity refinery, estimated to cost $3.5 billion; and a lube plant (estimated at $8.5 million). Others include a 300 million-litre capacity tank farm with a turnover of 600,000 million-litres/month, a gas processing plant to produce 50,000 cylinders for Liquefied Petroleum Gas (LPG) to make LPG gas more affordable; and a 4,000-capacity marshaling yard as trailer park. According to Adenutu, “the Petrolex Mega Oil & Gas City is conceptualised to enjoy the distinction of housing some of the most advanced oil and gas infrastructures in Africa. The first phase of the complex will comprise the 300 million liters Ibefun Tank Farm, residential quarters, army barracks, 30 loading gantries, and a 4,000-truck capacity trailer park with accommodation for drivers. “This legacy investment of over $330 million to date will be the largest products storage tank farm in sub-Saharan Africa and will create at least 2,000 jobs. Hopefully, by the time we’re done, it will be at least 70/80 per cent indigenous. It will actually help the economy of the town itself. It’s not just about direct employment, we’re setting up a city here.”
Post Views: 987