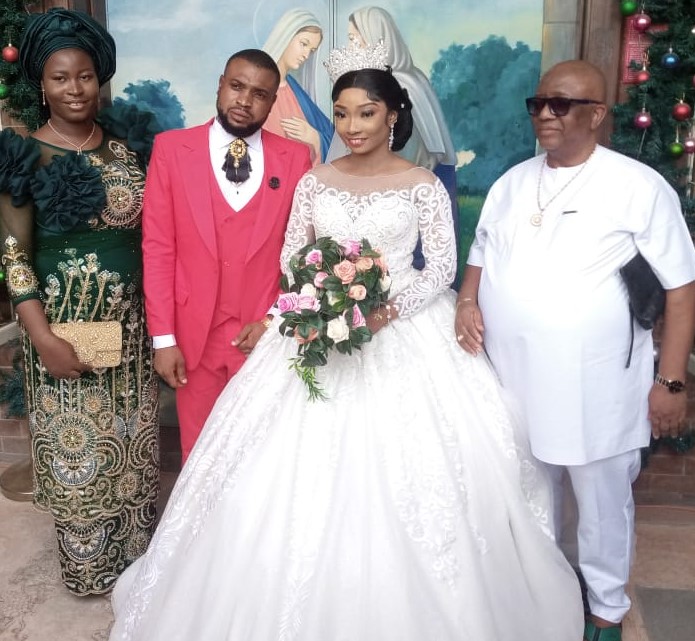 In a blaze of happiness, the Chairman/Chief Executive Officer of RichyGold Group of Companies, High Chief Richard Agbapuru, has given his daughter, Nkiruka Yvonne Agbapuru, in marriage to Francis Ikenna Aliakor.

The marriage solemnisation, which held on Wednesday at the Catholic Church of the Visitation in Festac town, Lagos was graced by family members, friends, business associates and other well-wishers from different walks of life.

In his sermon, the celebrant, Rev. Fr. John Oke, reminded all men and women that every marriage has its peculiar challenges, therefore marriage should not be seen as a temporary institution with expiry date.

“Marriage does not have expiry date. It is not for children but for mature people. With maturity, couples should be able to tolerate one another. Marriage is not a bed of roses, it comes with its challenges,” he told them.

Describing marriage as a mystery, the priest noted that though an institution which a man and woman freely get into, rather than the couple being two, Christianity regards them as one, thereby defying the mathematical correctness of one plus one being equal to two.

Fr. Oke further charged Christians, especially the married, to show good example to the younger generation by always following the right path. He expressed dismay that in contemporary times, many Christians relish ungodly things and have come to see issues concerning God as secondary in their lives.

Calling for a change of attitude, with God coming first in every situation, he exhorted couples to allow Christ be the centre of their marriage, stating that with Christ, they would always overcome their challenges.

A colourful reception followed afterwards at the ICAN Centre in Lake View Estate, with guests including businessmen, captains of industries, monarchs and academics in attendance.

Popular Lagos-based MC Kwekwe, who anchored the ceremony, made the occasion very lively with spells of comic relief that continuously stoked the audience to laughter. There was no dull moment as there was enough to eat and drink, even as DJ Steve “spoiled” the guests with trending and electrifying tracks.

With smiles of accomplishment, the joyous father of the bride, Chief Agbapuru, was all over the tables either exchanging pleasantries or ensuring that the guests had their fill of the assorted cuisines.

Expectedly, members of his Ugomba Social Club were in attendance and up and doing in showing love to their pioneer president with their gyration each time the RichyGold boss was on the dance floor.

For the happy pharmacist-bride, Nkiruka, it was a fulfilling moment tying the nuptials with Francis, an automobile dealer she described as “a very wonderful person.”