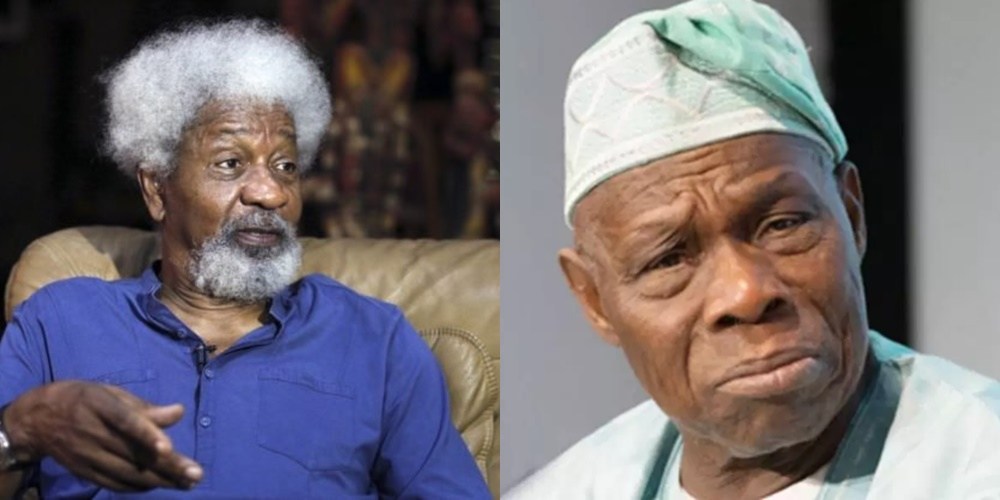 Nobel laureate, Prof. Wole Soyinka, has called out former President Olusegun Obasanjo again in his new book titled ‘Quis Custodiet Ipsos Custodes?: Gani’s Unfinished Business’ which was officially released to the public by Bookcraft on Tuesday. It formed the text of his speech at the 10th memorial lecture of the late Chief Gani Fawehinmi where he said,‘I know that deep inside, there is a soakaway pond of personal insecurity struggling to be drained. Beneath every bully, there is a scared product of insecurity and troubled conscience. Now, fight your own demons as best as you can, and feel free to flagellate Buhari (President Muhammadu) with all the weapons in your armoury. I have only one demand: keep away from movements struggling to restore this nation to the path of sanity and even moderate rectitude. End your hijacking propensity.” The renowned playwright also described the Presidential Library in Abeokuta, Ogun State, built by Obasanjo as ‘Presidential Laundromat’, alleging that it was constructed with fraud…

“That structure in Abeokuta remains a moral eyesore to those who were in a position to obtain even a glimmering of the proceedings that inflicted such a purulent carbuncle on the landscape of my state, Ogun. However, even the grossest evil can be turned to some good. When we were school pupils, one of our illustrated reading texts was one entitled, ‘This is the house that Jack built.’ Today, and forevermore, generations will point to that thing which I have daubed the Presidential Laundromat and say: This is the house that Fraud built.”

Soyinka also asked if someone with Obasanjo’s ‘governance record dare accuse anyone of failing to rise to the challenges of governance. ‘I dare Obasanjo to meet me one-on-one on any podium to present the facts of that stewardship to the Nigerian people… Just how did you, in eight years, rise to the challenges of power generation for a population of a hundred and fifty million people, endowed with enormous energy resources… “Eight years-repeat, eight years in office, and the elected estate manager of this vast territory could not even provide the modicum level of power to activate even a low-level cottage industrial culture. And such individual has the nerve to sermonise about rising to challenges.” He also noted that the allegation of corruption against Obasanjo by a former Abia State governor, Chief Orji Kalu, should be formally addressed, adding “again, we are also duty bound to point out that the author of that damning expose is himself standing trial on charges of corruption. We are aware that this pioneer letter-writer has been summoned by the EFCC to substantiate his claims.”
Post Views: 829