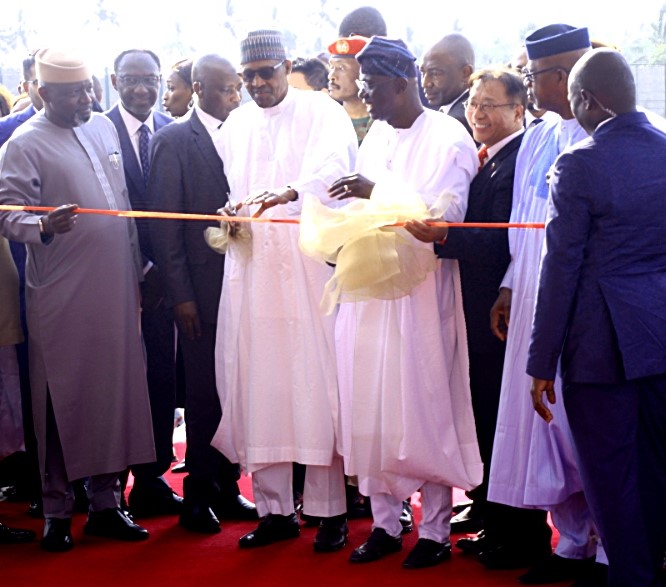 President Muhammadu Buhari, flanked by the Minister of Transportation, Mu’azu Sambo (left), Lagos State Governor, Mr. Babajide Sanwo-Olu (right), and others during his commissioning of the $1.5 billion Lekki Deep Sea Port for commercial operations in Lagos…Monday

With a lot of positive expectations, it is the dawn of reality already as President Mohammadu Buhari commissioned Nigeria’s first deep seaport, the Lekki Deep Seaport, for commercial operations that is set to lift the nation’s economy with an aggregate $361 billion in the next 45 years.

Commissioning the port in Lekki today, Buhari commended the promoters and assured that it would contribute significantly to the economy.

On his part, the Lagos State Governor, Mr. Babajide Sanwo-Olu, described the facility as the biggest infrastructure in the entire West Africa, stating that it would surely generate thousands of jobs in the country.

Meanwhile, Managing Director of the Nigerian Ports Authority (NPA), Mohammed Bello-Koko, said the facility was “a dream come true because Lekki Deep Seaport will be the deepest and most modern port in Nigeria with a depth of about 16.5 meters.

“It will be able to bring in bigger vessels and more cargoes, therefore the economics of scale would set in, and we believe that the cost of doing business in this country will be lower compared to other countries.

“It will also provide employment opportunities and will be more efficient, and will be a model for other upcoming deep sea ports in Nigeria.

“The NPA will be the regulator and we will be responsible for providing marine services. We have already gone ahead to purchase the necessary equipment that will ensure safe and secure berthing of vessels in this port.

“While sitting here, we have interest from a certain neighbouring country that is already talking about moving their cargoes from Lekki to Kano, then to the African country, because they have seen the opportunity of smooth operations and the efficiency here.”

On his part, the Director-General, Nigerian Maritime Administration and Safety Agency (NIMASA), Dr. Bashir Jamoh, said it was the emergence of one of the best ports in Africa, with the maritime industry as one of the key areas needed to pursue the development of Nigerian economy.

Indicating the prospect of the port, Tang Qiaoliang, who is the Chairman of China Harbour Engineering Company Ltd (CHEC) – the majority stakeholder in the project, described Lekki Port as “a major trade hub in West Africa.

“It will improve the Nigerian port industry, easing the burden of cargo shipment flow, creating employments, and ultimately promote international trade in the nation.”

According to him, the company saw the opportunity in Nigeria and believed in its potential, “so we committed the adequate financial investments and essential technology, together with Nigerians in the construction and operation of the port.”

For the Chairman of Tolaram (another investor), Mr. Mohan Vaswani, “this port being completed and commissioned is an important milestone for Tolaram and Nigeria and we are proud of our humble efforts to develop a world-class port in Nigeria.

“This significant milestone will definitely increase the economic well-being of Nigeria and its people and that is the most important thing.”

Lekki Port, a multipurpose deep sea port at the heart of the Lagos Free Zone, is poised to offer critical support to burgeoning commercial operations in the state, across Nigeria and the entire West African region.

The Phase 1 covers 50 hectares, with two container berths with a total capacity of 1.2 million TEUs annually. On completion of the final phase, the port will have three container berths, one dry bulk berth and three liquid berths.

The approach channel is about 11km long and 16.5m deep. The main breakwater is 1.9km long and will accommodate a corridor for liquid transport to and from the liquid berths.

The three liquid berths will service ships up to 160,000 DWT. The turning circle, which will have a diameter of approximately 600 metres, will be sufficient to handle 18,000TEU vessels.

Tug boats will assist in moving the various vessels. Equipped with the latest super post-Panamax, ship-to-shore cranes and rubber-tyred-gantry cranes, the layout will ensure that the port will be a modern, efficient facility.