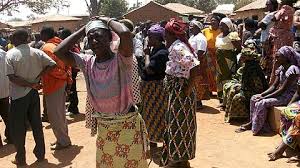 No fewer than 42 persons were killed on Saturday night when Fulani herdsmen unleash terror on Gana Ropp and Gashis villages of Barkin-Ladi Local Government Area of Plateau State.

It was learned that the planned attacks which took place at about 8:30pm simultaneously in Gashis and Gana ropp left many dead and several others inflicted gunshots injuries. The attackers set on fire, Church of Christ in Nations (COCIN), Gana Ropp and several houses with food stuff worth millions of naira.

National Chairman of Berom Youth Moulders Association (BYM), Choji Dalyop, confirmed the incident and said they have evacuated 34 corpses from Gana Ropp and 8 out of Gashis.

He said the attack which was carefully planned by the herdsmen and aided by some military personnel has sacked villagers from about five communities and several dead bodies are still being recovered.

“I believe that this attack was carefully planned by the herdsmen in collaboration  with some military personnel who aided the attack. We have recovered 34 corpses from Gana Ropp and 8 from Gashis while several others have not been recovered.

“The corpses would be close to 100 because apart from 42 corpses that we have recovered, we are mobilising people to go into the villages to pick other  corpses corpses that have not been recovered.” Plateau Government condemns recent attack, sue for peace.

Police Public Relation Officer of Plateau State Police Command, ASP Matthias Tyopev, confirmed the incident and said he has not been furnished with details about the casualty.

He said the casualty figure would be made public as soon as he get the detail.

Also, Spokesman of the Operation Safe Haven, popularly known as Special Task Force (STF) in charge of internal security in Jo’s and environs, Major Umar Adams, said there was an attack in Gashis, Gana Ropp and Gindin Akwati communities of Barkin-Ladi and their troops repel the attackers.

He said the casualty figure is not certain and pledged to brief our reporters as soon as he get the details.

Commissioner for Information and Communication, Hon. Yakubu Dati, in a press statement said government is deeply pained that despite concerted efforts which had led to the restoration of relative peace across the state, some unpatriotic elements are bent on disrupting the gains so far made.

“Government condemns these attacks and has mobilised the full compliments of security forces who are restoring normalcy in the affected areas and the environs.

“Government holds every single live as sacred hence, has mobilized medical and relief agencies to ameliorate the suffering of those in distress.

“As a government, we are committed to ensuring a safe and secured environment that will guarantee peaceful coexistence among the various groups in the state as we remain resolute to the well being of our people.

“We however appeal to citizens not to take laws into their hands and cooperate with security agencies to prevent further break down of law and order as they track perpetrators of the evil act.

The Peoples Democratic Party (PDP) in a press statement by the State Publicity Secretary, John Akans said the party received with rude shock the level of  genocide going on now in Gashish District, Razat, Ruku Nyarr and Gana-Ropp, all in Barkin Ladi Local Government. We also note with great pains the dastardly  attacks ongoing  in many other local government areas in the State by the Fulani militias.

“We condemn in the strongest terms the level of continuous genocide of Plateau people. At the moment Barkin ladi is under siege by the marabus with  over 130 people feared to have been killed . As at time of this statement, the (SOM)  CAPRO school of missions Gana-Ropp is under heavy attack by the militias.

“This unholy act of systematic genocide and the destruction of the cultural heritage of plateau people must stop.

“We call on the international community to come to the aid of Plateau people as besides the over 130 people killed many are missing.