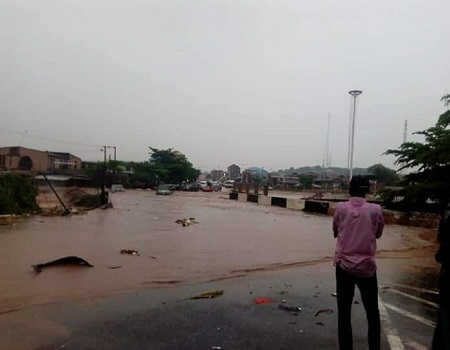 Many lives were lost on Friday following a torrential rain that resulted into a flood in Abeokuta, the Ogun State capital.

Property worth millions of naira were not spared by the flood, as houses, vehicles and household items were affected by it.

Virtually all areas within the Abeokuta metropolis were adversely affected by the flood, the kind that was last experienced in 2007.

Many bridges caved in while those who have their houses at the bank of the river were affected.
Mostly affected areas were Kuto, Isale -Igbein, Lanfewa, Amolaso, Ijeun-Titun, Ago -Ijesa.

At the time of filing this report, the State Commissioner of Police, CP Ahmed Iliyasu, was going around the town to ensure there was no breakdown of law and order.

Officials of the State Emergency Management Agency (SEMA) were equally everywhere in the metropolis.

The heavy rain started at about 4.00pm and stopped at about 8.00pm and caused a lot of traffic gridlock due to the flood.

Residents were seen counting their losses, while those who are searching for their dear ones were at the feet of the river that crossed the town to recover their relatives.

It was gathered that two children of the same mother lost their lives in the flood at Odedairo area of Ijeun -Titun.