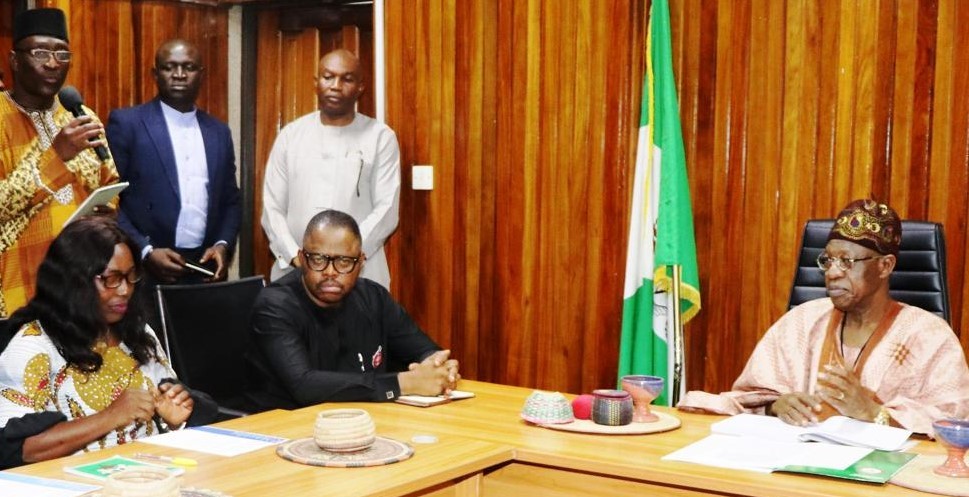 Minister of Information and Culture, Lai Mohammed (right), and members during a courtesy call by the Culture, Arts, Tourism and Entertainment Writers Association in his office in Abuja Thursday

Towards repositioning the Nigerian culture and tourism sector for wider recognition and acceptance, and attract more investments, create jobs and improve earnings for both practitioners and the government, the Ministry of Information and Culture has unveiled a range of activities for the next four years.

Mohammed told members of the Culture, Arts, Tourism and Entertainment Writers Association during their courtesy visit to his office in Abuja that the ministry would make ready the Motion Picture Council of Nigeria (MOPICON) Bill for the Federal Executive Council (FEC), to enable it attract the much-needed investment.

Others include setting up the Endowment Fund for The Arts to give legal framework for financing the sector; making the National Summit for Culture and Tourism a yearly affair starting from the first quarter of 2020; and ensuring a regular meeting of the Presidential Council on Tourism (PCT) to catalyze tourism growth.

It is equally kick-starting the implementation of parts of the Tourism Masterplan; establishing the Tourism Statistics and Tourism Satellite Account (TSA) in conjunction with the United Nations World Tourism Organisation (UNWTO), with which it already signed an agreement in this regard.

On the other side, the ministry is pursuing a unified national celebration of the World Tourism Day to end the current multiple celebrations; a yearly National Council on Culture and Tourism after the next edition in May 2020; a regional summit on culture and tourism from 2020; and launching the National Festival Calendar this year to attract more tourists to these events, among others.

He recalled that the ministry started with a stakeholders meeting in Abuja in April 2016, tagged the “National Summit on Culture and Tourism, to chart a new path for the creative industry.

According to him, “that summit ended with an implementation committee for the recommendations, which gave rise to the review of our Tourism Masterplan, resuscitation of the Presidential Council on Tourism (PCT), and a taskforce on the creative industry,” among other offshoots.

“There was also the roundtable in Lagos that provided stakeholders the platform to engage in business-focused discussions towards initiating and enabling private-sector-led growth and development of the industry, as well as the Creative Industry Financing Conference, to articulate ways of funding the creative industry.”

The results included the setting up of the anti-piracy unit by the Nigeria Police Force in all its 36 formations and the FCT, and the many consequent joint raids with the National Film and Video Censors Board (NFVCB) and seizures of pirated works, and though “we haven’t eradicated piracy, we have shown the political will to tackle the menace.

“Another fallout of the meetings is the Creative Industry Financing Initiative (CIFI) of the Central Bank of Nigeria (CBN) to improve access to long-term, low-cost financing for entrepreneurs and investors in the creative industry and the information technology sectors.

“Under this initiative, you can get a loan ranging from N3 million to N500 million for movie production, movie distribution, fashion and music, among others.  Pioneer status was also granted to the creative industry by the Federal Government to boost investment in the sector.

“We signed partnership agreements with the British Council and the Tony Elumelu Foundation to fast-track the growth of the industry. Under the latter, we have trained over 100 festival managers in Lagos, Abuja and Accra. The next phase is the implementation of the MoU on the mapping of the creative industry.”

As part of efforts to attract attention and infrastructural development to tourist sites, we visited a number of such sites across the country, just as we also attended many festivals. First, we showcased the Eko Atlantic City during the 2016 World Tourism Day and the 2018 hosting of the 61st UNWTO CAF Meeting.

Similarly, “we attended the premieres of many movies across the country in a show of support for the efforts of our brilliant and hardworking producers. They included Genevieve Nnaji’s Road To Yesterday, Mo Abudu’s Wedding Party, Bolanle Austen-Peters’ The Bling Lagosians, as well as Oloibiri,” among others.

Earlier, the association’s Chairperson, Dr. Bridget Onochie, said the group, which comprised arts and culture journalists across print, electronic and online media units, was interested in partnering the Federal Government and the private sector in repositioning the sector as a viable wing of the nation’s economy.

She explained that the objective was to collaborate with the government and other stakeholders in giving the sector the necessary positive publicity and branding for a stronger mileage even beyond Nigeria.

However, she noted that this task would be easier and more impactful if the ministry carries journalists along in the activities and programmes pertaining to the sector.