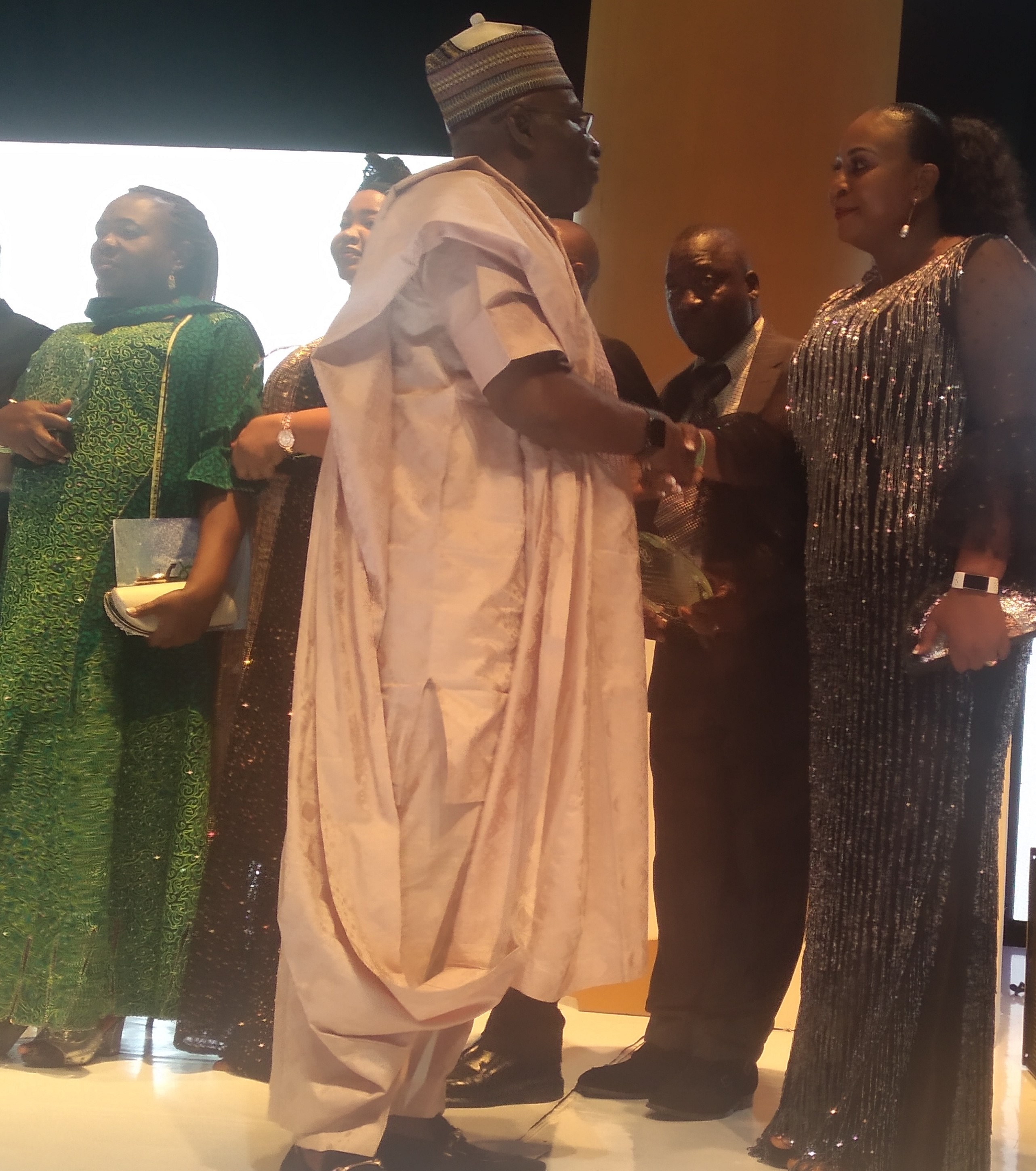 NIMASA Board Chairman, Maj.-Gen. Jonathan India Garba (rtd), congratulating some of the long service award recipients during the event in Lagos…Saturday

Nigeria is targeting a top 70 ranking in the World Bank Ease of Doing Business index by 2023, having moved up 39 places between 2016 and 2019, Secretary to the Government of the Federation, Mr. Boss Mustapha, has said.

Mustapha, who was chairman at the Corporate Dinner and Merit Awards organised in Lagos Saturday by the Nigerian Maritime Administration and Safety Agency (NIMASA), commended the agency for the various trade facilitation and administrative improvements it initiated, which also aided the ranking.

He noted that having moved from 170 since the inauguration of the Presidential Enabling Business Environment Council (PEBEC) in 2016 to 131 in 2019, a first 70 ranking was achievable by 2023. He stated: “In our bid to improve efficiency and productivity in the industry and country, the council was created to ensure an enabling environment for port efficiency.”

Stressing the need to recognise and appreciate the NIMASA staff and other industry stakeholders for the agency’s progress so far, he insisted that much still needed to be done. However, “government will continue to support the maritime sector because on it rests opportunities for wealth creation and economic growth.”

Earlier, the Director-General, Dr. Dakuku Peterside, said that NIMASA’s achievements were only made possible by a dedicated staff, who have improved the agency’s image and perception since the inception of the yearly awards three years ago.

He listed some feats as the introduction of final billing system, which has crashed vessels’ bill clearance time from between two and 10 years to 14 days, thereby improving vessel turnaround time, reducing dwell time and incidental demurrage, as well as recovering more revenue for the government.

Others included improved ship registry, increased ship tonnage, and the annual maritime forecast, all of which the agency disclosed accounted for the N16 billion it contributed to the nation’s consolidated revenue account as at October 2019.

Commending the long service awardees and maritime stakeholders, whose robust support he said was a source of strength for the agency, Peterside said that NIMASA was not under any illusion that all was already well, as more work still needed to be done to consolidate the modest achievements made so far.

Meanwhile, a terminal operator based in the Apapa Port, APMT, has emerged the Most Compliant ISPS (International Ship and Port Facility Security) Onshore Facility 2019.

According to NIMASA’s independent assessment and screening panel, APMT “maintained the highest compliance with the implementation of maritime security protocols in its onshore facilities, and maintains adequate access control and port facility security assessment and plans on a consistent basis in 2019 in line with the ISPS Code.”

The Best Terminal/Jettty Operator was Tin Can Island Container Terminal (TICT), for maintaining “the highest level of operational excellence in its cargo handling, effective automation systems and compliance with all HSE regulations, in line with extant regulations governing their practice.”

Similarly, GAC Shipping Company won the Overall Shipping Company award, having “handled the highest number of vessels in 2019, while demonstrating commitment to prompt and correct submission of cargo documents, compliance with 3 per cent bill regime and evidence of high safety standards.”