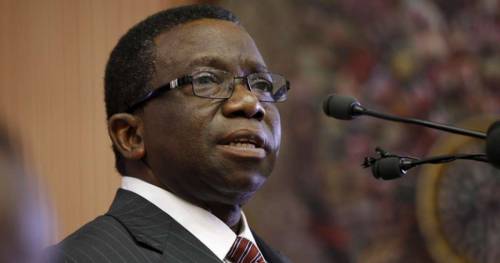 The Minister of Health, Prof. Isaac Adewole, has urged husbands to stop struggling with their babies over breasts, but rather allow their wives to put the babies on exclusive breast milk.

This is just as the minister revealed that he was having talks with the Ministry of Labour and Employment to extend maternity leave from the current four months to six.   Adewole said this at the ministerial briefing and inauguration of the 2018 World Breastfeeding Week and High Level Policy Dialogue on Breastfeeding in Abuja on Thursday.   Speaking on the theme, ‘Breastfeeding: Foundation of Life’, the minister said breastfeeding remained the surest way to have a healthy baby.   He said, “What has been shown clearly is that the brain, which we actually need to drive everything we do in life, is sorted out in the first two years. So, if you give the baby good food, good protein, we will have good workers and good leaders in the future.   “But if we don’t give them good food, then we will have a generation of jesters over the years and that is not what we want in this country. So, breastfeeding is a national investment in the cerebral architecture of our citizens and in the future development of our country.   “So, let us work together to promote it. To the men, please allow the women to give it to the babies. Don’t share or compete with the babies. Only promote it. To the women, I know you love us but don’t give it to us, give it to the babies.”   Adewole noted that he was having talks with the Minister of Labour and Employment, Dr. Chris Ngige, on the possibility of extending the maternity leave from four to six months.   He said this would give women more time to breastfeed their babies.   The minister noted, “Now we have four months of maternity leave but we are working with labour to increase it to six so that there will be no excuse because if you have six months, there is no excuse.”   In her remarks, the Minister of State for Budget and National Planning, Mrs. Zainab Ahmed, said statistics showed that of the seven million babies born every year, less than 25 per cent put on exclusive breast milk.   Ahmed said that babies who are well breastfed hardly fall sick while mothers have a reduced risk of ovarian and breast cancer.   She added, “Health practitioners have advised us that initiating breastfeeding within the first hours of life reduces the rate of neonatal mortality by up to 22 per cent. It also reduces the risk of asthma and obesity in the babies.   “Approximately, seven million children are born in Nigeria every year and, according to the 2014 National Nutrition Survey, only 25 per cent are exclusively breastfed between the ages of zero and six months.”
Post Views: 1,197