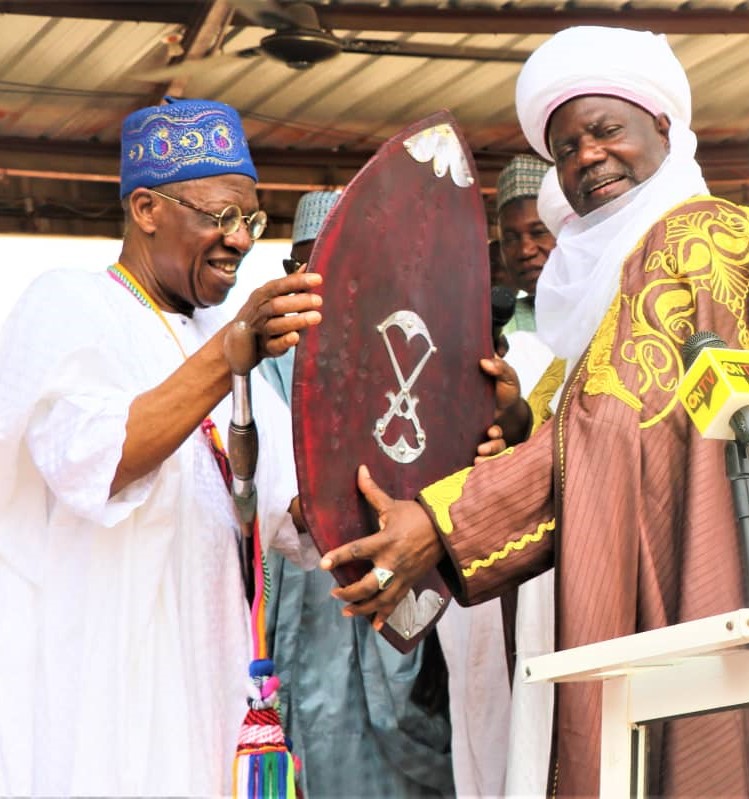 Mohammed (left) receiving the traditional sword of authority from the the Emir of Argungun, Sama’ila Mera, Tuesday in Abuja

Eleven years after it was halted due to insecurity, the trailblazing Argungun International Fishing Festival returns to Nigeria’s culture and tourism calendar next week thanks to a partnership between Federal and Kebbi State governments.

Unveiling to newsmen the activities lined up for the 60th edition of the festival, which comes up from the 11th to 14th of this month in Argungun, the capital of Argungun Emirate, the Minister of Information and Culture, Mr. Lai Mohammed, said the ministry would give the festival global visibility and publicity.

“At the Federal Ministry of Information and Culture, we attach great importance to this festival, just like many of our great festivals nationwide,” the minister explained. “This explains why we are leaving no stone unturned at ensuring maximum publicity for the forthcoming festival.

“We are going to Argungun next week with a battery of journalists to help raise the profile of the festival. We will be using the new and traditional media to put the 2020 Argungun International Fishing and Cultural Festival on the national and international maps. The festival deserves no less.”

He noted that the festival has been included in the calendar of Nigerian festivals to help tourists easily plan attendance at the various festivals.

Also, the Kebbi State Government has listed grand fishing, Kabanci display, agricultural show, cultural display, catapulting and archery, as additional events for this edition, noting that though a cultural festival, these other highly entertaining events were added to enrich it further.

Assuring the safety of participants and guests at the festival, he said that Kebbi remained one of the most peaceful and safe states in the country, adding that airlines would as well be providing additional flights to the state and neighbours during the event.

Meanwhile, the Emir of Argungun, Sama’ila Mera, has decorated Mohammed with the Kakakin Kebbi (Ambassador of Kebbi Culture in Nigeria and beyond), and handed him the traditional sword as a symbol of authority.

He explained that Mohammed was honoured for projecting the nation’s diverse people and cultural heritage across the world, his fearless defence of national identity and integrity through the discharge of his official responsibilities, and for creating jobs, income and positive awareness for the youths through festivals, arts and cultural exhibitions.

The emir added: “I will like to use the moment to invite competitors nationwide to all the events. Winners will receive handsome rewards.”

The four-day yearly Argungun Fishing Festival began in 1934 to mark the end of the centuries-old hostility between the Sokoto Caliphate and Kebbi Kingdom.