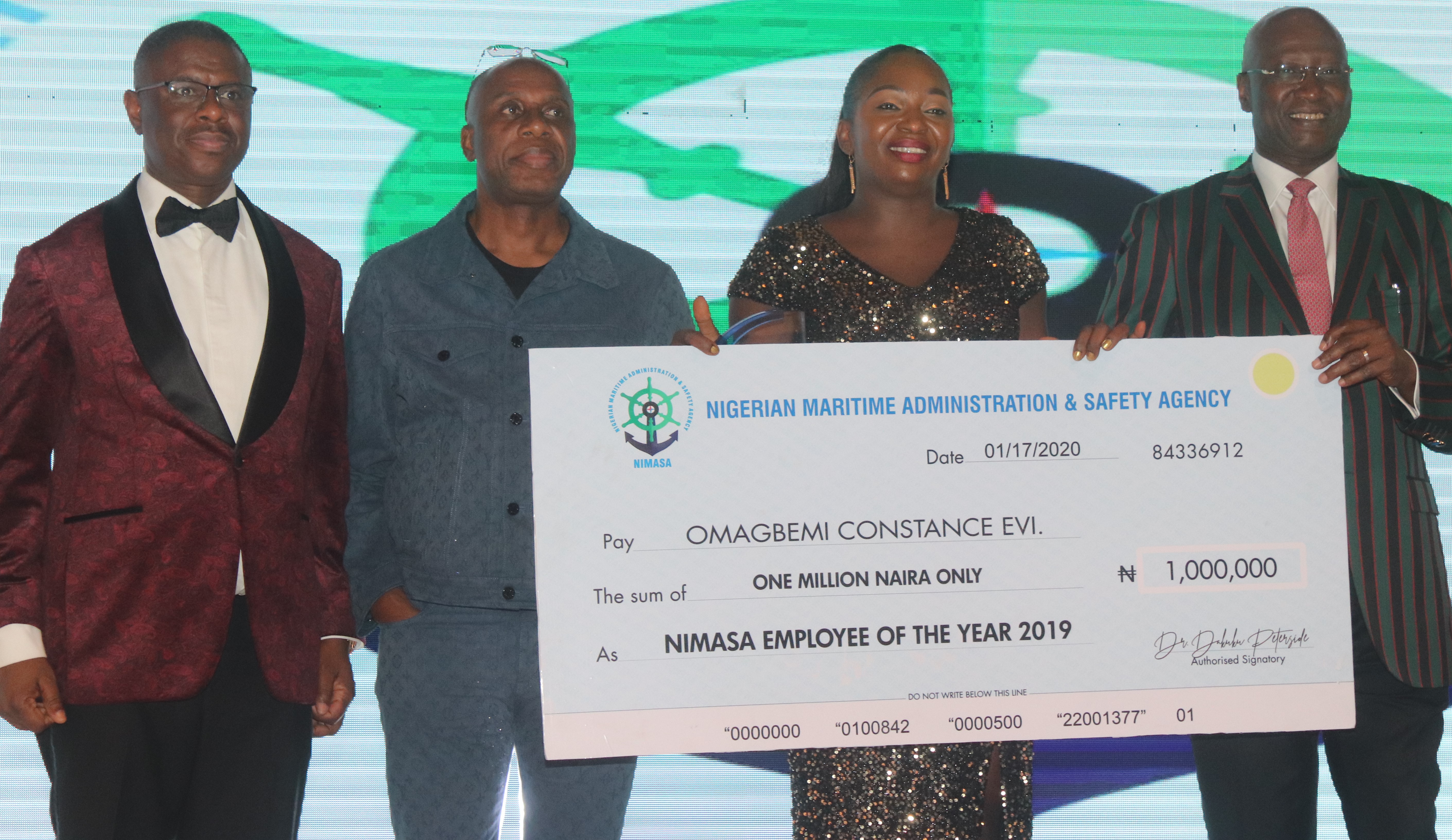 NIMASA Director-General, Dr. Dakuku Peterside (left), Minister of Transportation, Chibuike Amaechi, NIMASA Employee of the Year, Omagbemi Constance Evi, and Secretary to the Government of the Federation, Boss Mustapha, during the NIMASA Corporate Dinner and Merit Awards in Lagos

Nigeria is focused on establishing a strong inter-modal transport system that would facilitate seamless movement of people and goods to drastically reduce cost of business generally, as a strategic driver of government’s economic diversification and growth agenda.

This was disclosed in Lagos by the Minister of Transportation, Chibuike Amaechi, during the Corporate Awards and Dinner organized by the Nigerian Maritime Administration and Safety Agency (NIMASA).

Stating that a developed transport sector will bring about “increased productivity, which comes with creation of more jobs and production of more goods and services, he noted that “these will make the economy more competitive, reduce dependence on oil, and usher in economic growth.

“We are aware that transportation is key in any economic development plan. The major elements of production – raw materials, machines, people, finished products, etc. – have to be seamlessly moved from one point to the other as the need arises.”

According to him, “the President Muhammadu Buhari government is implementing a transport policy that entails linking all seaports in the country by rail, in line with global best practices. We have a 25-year rail modernisation programme involving the development of a comprehensive inter-modal system.

“We are taking the rail from where the past governments stopped to the seaports. The Lagos-Kano rail line, which began from Ebute Metta, is being taken from Ebute Metta to Apapa seaport. We will take it from Tin Can and Apapa to connect the new Lekki port.

“The rail line from Lagos to Calabar links Port Harcourt, Onne, and Warri seaports. Our goal is to have a system where importers would bring in their goods and load them on the rail that takes them to the hinterland, thus easing the pressure on the roads and increasing their longevity.”

He further explained that adequate investment in transport infrastructure will enhance the efficiency, reliability and capacity of the transportation system, which will in turn lead to lower transport cost, shorter transit time, increased business efficiency and expansion, as money previously spent on transport is ploughed back into business.”

On his part, NIMASA Director-General, Dr. Dakuku Peterside, listed some of the agency’s achievements in the last three years to include the Final Billing regime, which has significantly reduced vessel turnaround time, and billing transactions from between five and 10 years to two weeks of the ship’s departure.

It has also achieved “increased tonnage, with Nigeria currently second in Africa (after Liberia), reduction in turnaround time for issuance of sailing clearance from about a year to 14 days, digital transformation, improved maritime safety, security and domain awareness.

The others include “tripartite agreement by maritime stakeholders, which has ensured harmonious labour relations, renewed capacity building drive through implementation of a five-year cabotage cessation plan, and enhancement of the Nigerian Ship Registry.”

Meanwhile, 181 members of staff bagged 15 to 30 years long service awards, with Mrs. Constance Omagbemi emerging the Employee of the Year. In the maritime industry category, a terminal operator based in the Apapa Port, APMT, emerged the Most Compliant ISPS (International Ship and Port Facility Security) Onshore Facility 2019.

According to NIMASA’s independent assessment and screening panel, APMT “maintained the highest compliance with the implementation of maritime security protocols in its onshore facilities, and maintains adequate access control and port facility security assessment and plans on a consistent basis in 2019 in line with the ISPS Code.”

The Best Terminal/Jettty Operator was Tin Can Island Container Terminal (TICT), for maintaining “the highest level of operational excellence in its cargo handling, effective automation systems and compliance with all HSE regulations, in line with extant regulations governing their practice.”