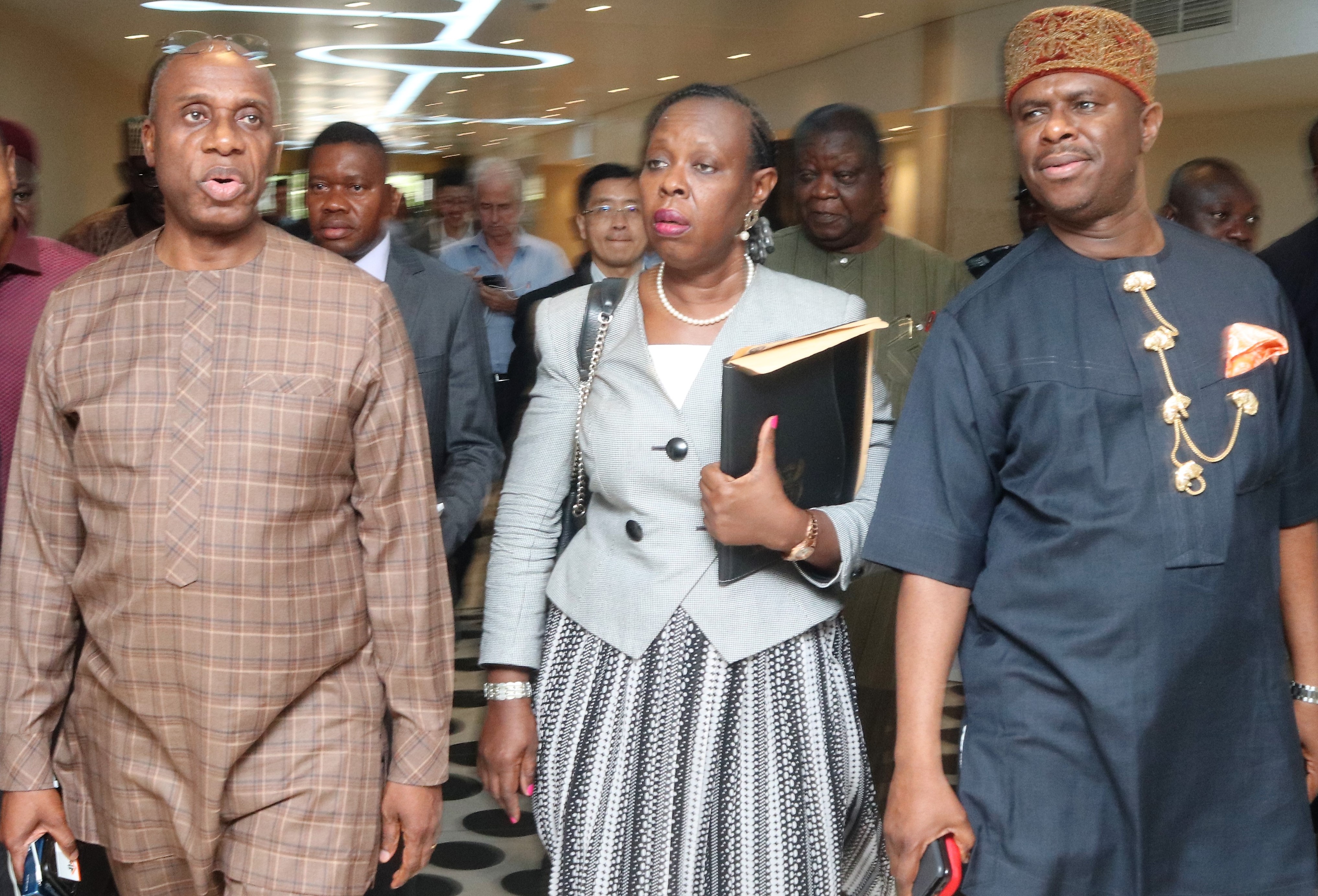 Minister of Transportation, Chibuike Amaechi, President, WIMAFRICA, Jean Anichere, and Director-General of NIMASA, Dr. Dakuku Peterside, at the maritime stakeholders meeting in Lagos on the disbursement of CVFF

Over 15 years after the Cabotage Vessel Financing Fund (CVFF) was created, and after many failed plans to disburse it to indigenous ship owners, the Federal Government has set up a new guidelines drafting committee to begin another process towards its disbursement.

Given the long stretch of bureaucracy to be involved, including an approval of the guidelines by the minister, the National Assembly, and then the bank processes, the move forecloses all hopes that the funds would be disbursed in the first quarter of 2020, as Amaechi had assured maritime stakeholders in December 2019

Referring to his former committee, the Minister of Transportation, Mr. Chibuike Amaechi, said while setting up the new one during a meeting with maritime stakeholders in Lagos that they have “looked at the old guidelines and seen that it will not be favourable to every party involved.

Therefore, “we are setting up this committee to look at the guidelines and come up with a workable one that will suit all parties involved.”

Amaechi said the committee would forward to him the proposed guidelines, which he would afterwards send to the National Assembly, adding that the body would be chaired by the Director-General of Nigerian Maritime Administration and Safety Agency (NIMASA), Dr. Dakuku Peterside.

While the committee will determine the percentage interest on the facility, the “banks will be involved in developing the criteria for the disbursement of the fund, so the risk would be borne by the lending institutions” to guard against the beneficiaries not returning the loan as expected.

Meanwhile, Peterside has stated that only contributing shipowners will benefit from the fund, which he disclosed to be $200 million presently, adding that after the committee’s work, “the minister would study this draft and pass on to the National Assembly for approval, in line with the Cabotage Act.

“Thereafter, we would move to the next phase of actual disbursement, using the banks as platform.”

Nevertheless, he explained that time for disbursement depends on “how soon the National Assembly approves the draft guidelines,” which provisions “will have to be followed religiously by the participating banks. Stakeholders have to meet these requirements before the disbursement of CVFF.”

He reiterated that the fund was meant to promote indigenous capacity in the shipping sector by assisting Nigerians in the procurement of maritime assets in line with the Cabotage Act, which seeks to encourage indigenous participation in the maritime industry.

He further disclosed: “Our utmost goal is to grow the maritime sector and encourage more indigenous participation. We are working with the Ministry of Transportation and also discussing with the Central Bank of Nigeria to see the possibility of granting loans to qualified operators at single-digit interest rate.”

Meanwhile, ahead of the drafting of the guidelines, Orakwusi, who expressed hope of a judicious use of the fund, has canvassed a long spread of the interest, as ships last for over 30 years, insisting that “it should be single digit interest and a lower figure.”